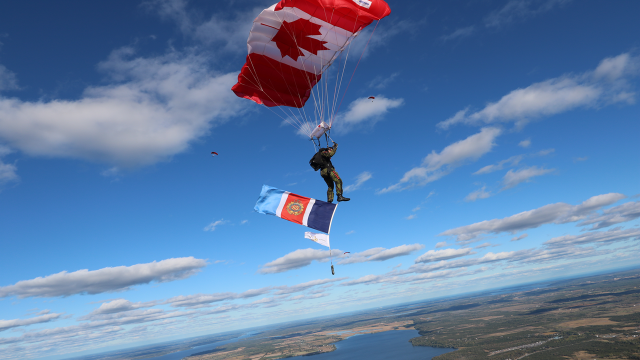 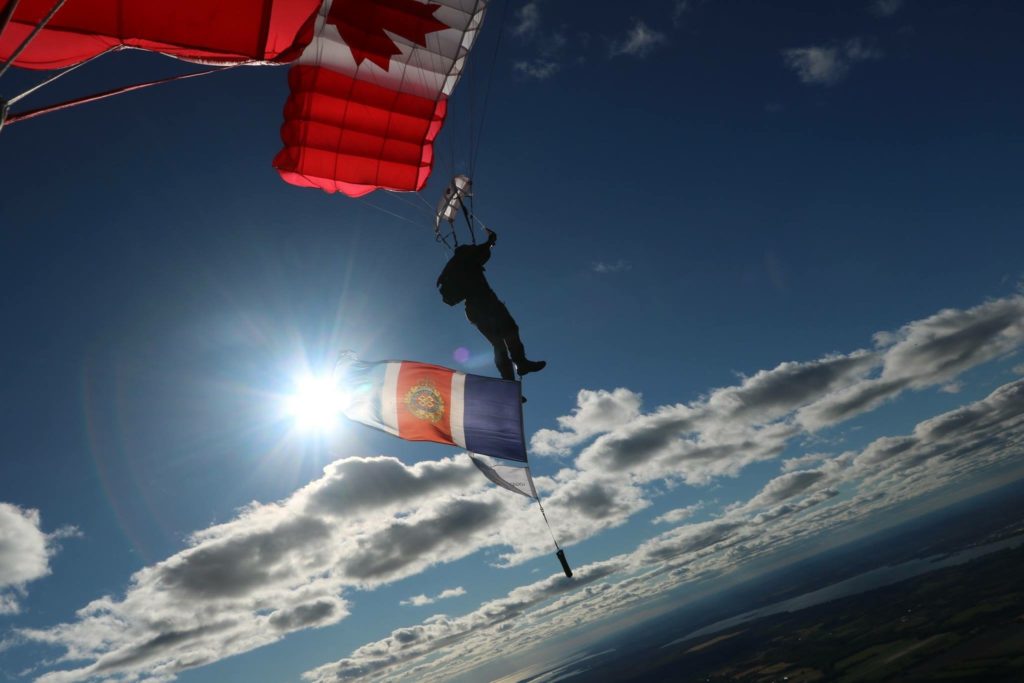 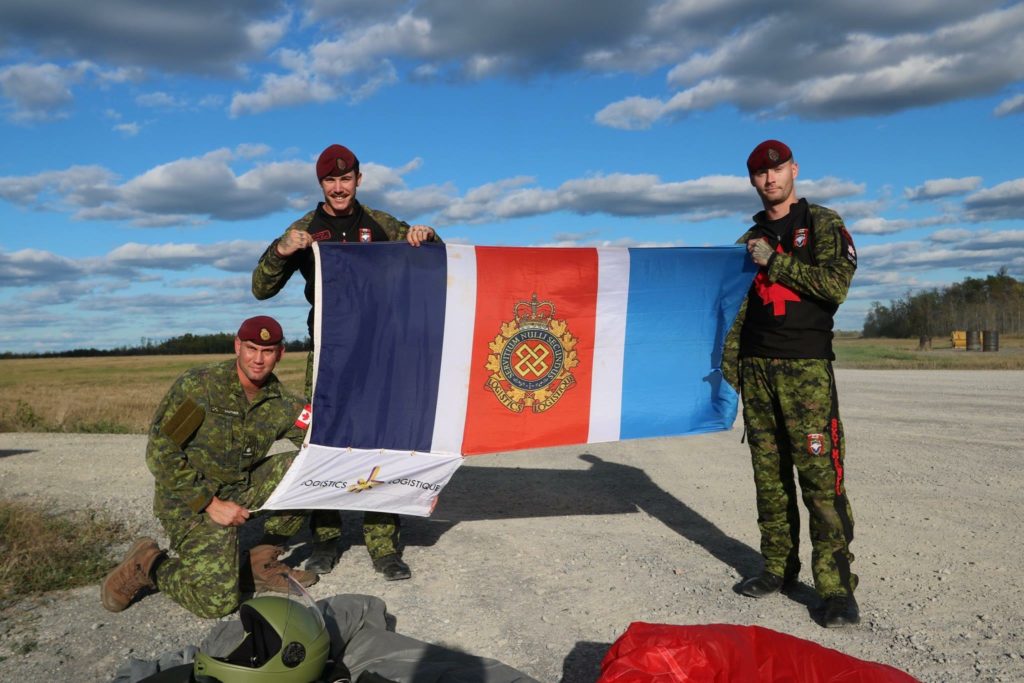 As part of the lead up for the celebration surrounding the 50th Anniversary of the Logistics Service, a flag relay has been organized to highlight the contribution to the Canadian Armed Forces by Logisticians. This past autumn 2017, the journey brought the flag to Trenton where two members of the Canadian Armed Forces Parachute Demonstration Team, The Skyhawks, took it for a skydive from 6,000 feet. Along with the two members of the team were six other Logisticians on board the aircraft to do various types of airborne currency training.

“The SkyHawks’ Team Warrant Officer, WO Steve Ouimet, informed me about (the Flag Relay),” said Master Corporal Jeremy Canfield, a supply technician, and parachute rigger.  “His wife, Sgt Isabelle Dufour, is a Logistician and they thought that this would be a good opportunity to show that riggers are also Logisticians.”

Parachute riggers are supply technicians by trade.  There are around 50 who are currently qualified to rig parachutes in the Canadian Armed Forces. They are mainly located in Trenton, but are also posted to Search and Rescue squadrons and other units with parachutists. It takes three years of training to qualify as a parachute rigger.

“Perfection” is the word MCpl Canfield uses to describe a parachute rigger’s job. “It has to be perfect every time,” he says. “When we give a parachute to a guy he has to have no doubt in his mind that the chute is going to work.”

Corporal Jason Bent, a parachute rigger, had the privilege to carry the official 50th Anniversary Logistic Branch flag during the dive, while MCpl Canfield, who has more experience with doing camera work, took the lead with imagery.

Cpl Bent describes this event as a good opportunity to show pride in the Logistics Service.  “It feels special to be part of the only few people that will have the opportunity to jump with this specific flag,” he said. “Other than that, it was like any other day at work. It was fun to have my teammate filming to get the perfect shot.”

To prepare for the jump, the riggers removed numerous lapel pins attached to the flag and a small banner for safety reasons. These items were put in a small bag and were also part of the jump.

MCpl Canfield explained that they did a quick rehearsal, what the SkyHawks call a “dirt dive,” to plan the whole skydive before the actual dive. “This jump is a good opportunity for us to show what we can do, not only as Logisticians but also to take what we do as a job and show the rest of the community what we can achieve.”

Logisticians are the backbone of military operations and the flag relay contributes to getting the word out about the 50th Anniversary of the Logistics Service. “It is important, we have been around for 50 years,” MCpl Canfield said. “Especially within my unit, this place couldn’t run without Logisticians.”