The Construction of the DEW Line 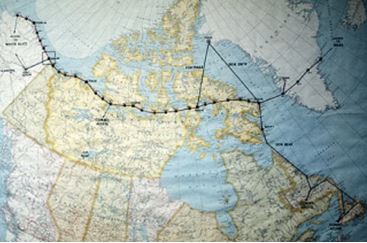 The Distant Early Warning (DEW) Line was built to be North America’s first line of defence against Soviet bomber and InterContinental Ballistic Missile (ICBM) attack from across the North Pole, the shortest route for the USSR to reach North America. The DEW line, with its chain of radar stations above the Arctic Circle and across the Canadian arctic as well as Alaska, Greenland, Iceland, and the Faroe Islands, was first and foremost a joint Canadian/American project that would replace the inadequate and, by then, obsolete Mid-Canada and PineTree lines. More importantly, the DEW Line was arguably the most ambitious and logistically challenging military construction project in Canadian History.

The first phase in this monumental construction project was an aerial survey of potential sites; this involved more than a million miles of travel by mapping teams, and produced over 80,000 aerial photos. Once the operating sites were chosen, it was possible to start the hiring and transport to the polar regions of skilled labour, a process which began in December 1954. This also included the transport and installation of food, shelter, tools, machines and materials in order to construct; buildings, roads, storage tanks, towers, antennas, airfields and hangars. All in all, approximately 25,000 people were directly employed on this project, with 1.6 million others working on related projects and with products flowing in from over 113,000 purchase orders issues to 4,650 supplier companies in Canada and the U.S.. This included over 66,000 orders worth more almost $200 million in Canada, and almost 50,000 orders worth almost $150 million in the U.S..

With the personnel hired and the contracts issued, the next step was the giant task of transporting the building materials to the various sites during the short arctic summers. This was done by military and civilian airlifts as well as huge sealifts to dozens of arctic ports. These sealifts included 3,000 U.S. Army Transportation Corps soldiers who had been given special training in unloading of ships under arctic conditions. Once landed, the cargoes were transported to the sites along the entire length of the line by snowcat trains and barges for the building of the permanent settlements at each site. Naval convoys transported 281,600 tons of materials, with another 17,600 tons being moved by Cat Train, and 20,300 tons by barge between 1955 and 1957. An airlift brought in another 140,000 tons, for a grand total 459,900 tons of building materials. Also shipped north were 75,000,000 gallons of petroleum products, including 43,000,000 gallons that arrived in 818,000 drums.

The backbone of the whole operation was the airlift, mainly provided by the U.S. Air Force which used LC-130 Hercules from the 139th Airlift Squadron to do most of the work, with C-124 Globemasters and C-119 Flying Boxcars flying in support. A large number of civilian aircraft were also pressed into service, including small bush planes and airliners belonging to some 50 Canadian and 31 U.S. commercial airlines. Enough airstrips were built in the arctic to cover 26,700,000 square feet, more than 9,600,000 cubic yards of gravel were produced, 46,000 tons of steel were used, and sufficient power generation equipment was brought on line to produce 155,000 kilowatts of energy per day. Finally, 22,000 tons of food, 12 acres of bed sheets, 6 acres of rugs, 3 miles of window shades, and, last but definitely not least, 100,000 copies of 600 different manuals covering operation and maintenance of the line were also sent in during the 32 months before the DEW Line was finally ready for operations on April 15th 1957.

The construction work itself was done under the direction of the Western Electric Company, an electrical engineering and manufacturing firm that had its headquarters in New York City and that was one of the companies that would eventually form the telecommunications giant AT&T. Work was done all year round, and would involve over 7,000 bulldozer operators, carpenters, masons, plumbers, welders, electricians and other tradesmen from the U.S. and Canada who laboured in 24hr daylight and darkness, blizzards and sub-zero cold to put it all together.