The Carvings at Vimy Ridge 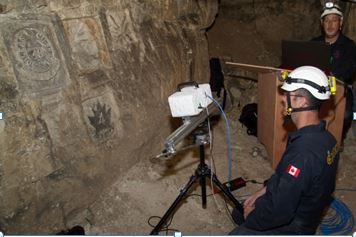 During the run-up to the battle of Vimy Ridge in World War I, Canadian soldiers being staged underground in preparation for the attack created a number of remarkable carvings in the chalk caves around the town of Arras. These First World War soldiers carved to pass the time, but also to leave behind something by which to be remembered, something which has never been properly documented, and something of which the Canadian public remains generally unaware. The Canadian Historical Documentation and Imaging Group (CANADIGM) is a small, not-for-profit group dedicated to advancing public education and awareness of events, artifacts, and sites of historical significance, and to preserving the legacies of these sites through advanced documentation technologies and media. Since being established in 2011, the group has been involved in recreating exact replicas of the carvings and inscriptions at Vimy, and these recreations are now part of an exhibit titled Souterrain Impressions which is currently touring Canada.

CANADIGM has used non-invasive techniques to duplicate the carvings, and has researched the soldiers who left their mark to create a personal and moving exhibit that can be shared with the Canadian public. All team members are volunteers, and dedicate their time and personal resources to be part of the Group. CANADIGM`s hope is that many Canadians will visit the exhibit as it tours Canada. The exhibit kicked off in London, Ontario in April of 2015, and it continues to tour across the country. You can keep track of the exhibit and receive more information through the following website: http://canadigm.ca/

* Lt Mould is a Logistics Officer currently employed as the Operations Officer, 31 Service Battalion London, Ontario. He is also a founding member of CANADIGM, and has personally travelled to France three times, where he worked in the caves for weeks at a time.