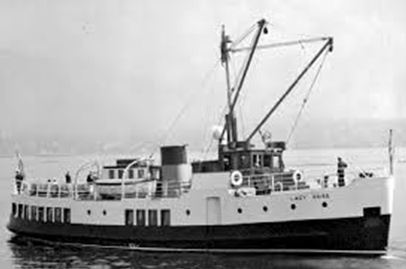 One of the more unusual transport companies formed by the Royal Canadian Army Service Corps (RCASC) during World War II was the Pacific Command Water Transport Company (PCWTC). The PCWTC was based in Vancouver and, although it operated some 70 different marine vessels from multiple ports along the British Columbia coastline, it was an Army unit under the jurisdiction of the Canadian Army’s Pacific Command.

Pacific Command was responsible for defending Canada’s Pacific coast against Japanese attack, and it created PCWTC in 1942 to carry out a variety of tasks related to that task. The Company’s official mission statement involved “water-borne freight hauling and maritime patrol” which meant, more specifically, the resupplying of the camps which had been established to build a telephone link between British Columbia and Dutch Harbor, Alaska after the Japanese invaded and occupied the Aleutian Islands of Attu and Kiska in June, 1942.

The Company also managed the resupply of freight and personnel to remote Royal Canadian Air Force radar stations strung along British Columbia’s rugged seacoast and other tasks like towing damaged ships and target towing for coastal gunnery practice. The ships themselves were ex-fishing boats, 60-70 foot long seiners which were berthed at Coal Harbour, Port Alberni, and Prince Rupert. These vessels were usually crewed by eight other ranks, each of whom was armed with a Lee-Enfield rifle, and the ships themselves each carried two World War I-vintage Lewis machine guns on a twin mount. The PCWTC vessels sailed under their own flag which consisted of a “maritime blue ensign with crossed swords on the fly”. The PCWTC was disbanded in 1945 following the Japanese surrender.