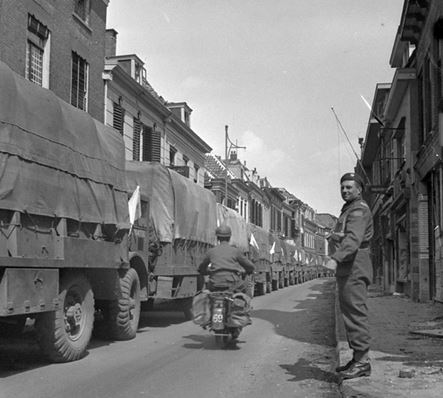 The winter of 1944-45 was a desperate time that came to be known as the “hunger winter” in Holland. What little food there was had been largely commandeered by the occupying German forces and many thousands suffered malnutrition and even death (Including a fifteen year old girl named Audrey Ruston, who survived her winter of privation in Arnhem and, despite lifelong ill-health from eating tulip bulbs and bread baked from grass, went on to become the award-winning actress and renowned humanitarian that we remember as Audrey Hepburn). By April of 1945 the 1st Canadian Army was driving hard against the remaining elements of the German Army in western Holland and the local German leadership, sensing the imminent finish and perhaps nervous about the prospect of war crimes charges for their treatment of the population, offered a truce to allow the allies to distribute food to the starving civilians. American and British/Canadian air operations (Op CHOWHOUND and Op MANNA) were quickly organized, with allied bombers fling at low level to drop massive quantities of food over city rooftops, some of them bearing signs that read “Thank You, Canadians”. Unfortunately, the shattered Dutch distribution system and the lack of or ill health of available civilian labour made it impossible to distribute this food effectively, and it became obvious that the 1st Canadian Army would have to get involved in a large and active program to carry food over land and across German lines for the relief of the starving Dutch population.

Operation FAUST had its beginning on 1 May, 1945 when 1st Canadian Army Commander LGen Charles Foulkes met 25th German Army Commander LGen Paul Reichelt to organize safe passage for the food-laden land convoys. The two sides agreed that neutral corridors would be established in the north and the south and that in these areas all troops would stand fast, there would be no patrols, and the firing of weapons of any kind would be forbidden. Foulkes and Reichelt subsequently agreed to expand the neutral zone and to form a Joint Food Distribution Committee to deal with any complaints regarding the proper execution of the operation, and Reichelt agreed to provide guards to protect food dumps from civilians and German Troops. Having been tasked with the urgent land delivery of food, coal and medical supplies, the trucks of the Royal Canadian Army Service Corps (RCASC) began to roll on 2 May, and by the following day, a fully-loaded convoy of 30 vehicles was crossing the line every 30 minutes. During the talks Foulkes tried to interest Reichelt in the idea the surrender, but Reichelt declined, saying that he and his troops would rather open the dykes to flood Holland and to fight and die rather than surrender the country (A position that he subsequently reconsidered when Foulkes pointed out that flooding the country and thereby adding unreasonably to the already considerable suffering of the Dutch people would certainly lead to war crimes charges against those responsible).

Dutch labourers loaded the Op FAUST the trucks with food and supplies at two Service Corps supply dumps in Nijmegen, and the convoys proceeded from there to drop-off points in the neutral zone, where the supplies were handed over to the Dutch authorities who were responsible for dispersal and distribution. The Dutch were aided in this by the provision of 200 Canadian military vehicles for frontline distribution and by the work of additional Canadian troops assigned to help make up for the weakened condition of many Dutch labourers and to stand in for the massive numbers of able-bodied men who had either been sent to Germany as slave workers or who had been driven into hiding to escape such a fate. Op FAUST ran from May 2nd to May 9th, and delivered between 840 and 1141 tons of food and supplies per day. This came at a time when death had already stricken the very young, the elderly, and the poor but, were it not for these food runs, acute starvation would certainly have set in and would have caused a massive increase in suffering and death throughout the occupied Dutch territories.