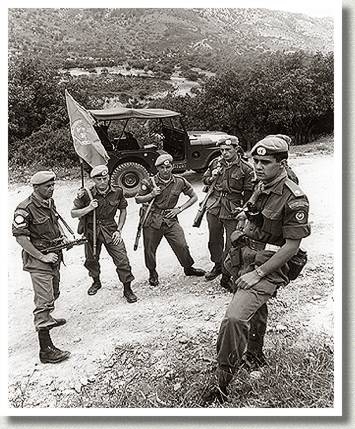 Logistics support to UN peacekeeping operations is usually thought of in terms of traditional Log functions like supply, transport, etc., but the Logistics community has demonstrated an ability to perform more direct combat roles where required by the military situation. One such example happened in Cyprus.

Canada’s longest peacekeeping mission began in 1964 when the UN intervened to control fighting between Greek and Turkish communities on the Mediterranean island of Cyprus. On 15 July 1974, officers of the Greek Cypriot National Guard staged a coup d’état with an aim of uniting Cyprus with Greece. Declaring a need to protect the rights of the Turkish Cypriot minority, Turkey responded by invading with 40,000 troops. The Turkish force quickly secured its initial objectives, and extended its territory into the Turkish sector of the island’s capital, Nicosia. Their final objective was to be the Nicosia airport, but Indian Lieutenant-General Prem Chand, the UN force commander, and Canadian Colonel Clay Beattie, his Chief of Staff and the commander of the Canadian contingent, both agreed that allowing the Turks to take the airport would be an unacceptable blow to UN credibility.

The airport was declared a UN protected zone, and elements of the Canadian Airborne Regiment were deployed in its defence. Hearing of a planned assault, the Canadian contingent reminded both sides that they had agreed to a ceasefire, and clearly stated their intention to defend the airport, allowing the world press to report a Turkish assault on UN troops. The Turks apparently believed that the Canadian contingent would stand its ground and, although they certainly had the means to overcome the Canadian troops, they chose not to do so. Bravado, made credible by the evident professionalism of Canada’s soldiers, won the day and saved the airport.

With the ceasefire established, UNFICYP faced the challenge of holding the Airport. The airport fell within the Canadian sector, but multiple competing taskings drained the Canadian reserves. The Canadian contingent called on its non-combat logistics company personnel and cooks and clerks found themselves manning machine-gun emplacements on the airport’s perimeter. As a temporary solution, Major D Harries of the Canadian logistics base was put in charge of an ad hoc multinational force which included scratch platoons from Canada, Britain and Finland. Severely undermanned and under-strength, the Canadians spent the night of 23-24 July on the tarmac with an entire Turkish battalion less than 500 metres away. Actions at the airport and other hot spots throughout Nicosia cost the Canadian peacekeepers, 2 dead and more than 30 wounded, but the Canadian peacekeepers demonstrated their resolve. In defending the UN mandate, they defined a new style of peacekeeping, actively intervening between opposing sides rather than simply and passively occupying ground between them.