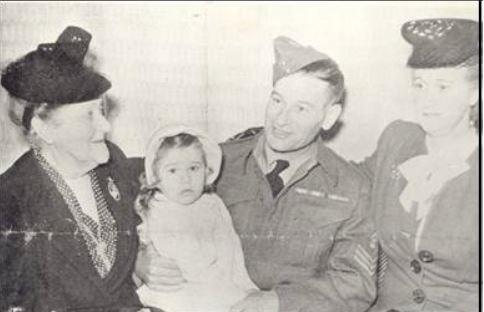 The announcement of the award of the Distinguished Conduct Medal to Staff Sgt. Charles Albert Clark, of Toronto, Ontario reveals a story of courage in the face of the enemy.  The citation reads (in part):

Staff Sgt. Clark of the Canadian Postal Corps was at Headquarters of “C” Force at Hong Kong.  A building in which he was quartered received a direct hit from a heavy shell.  One of his officers was killed and Col. Patrick Hennessy, DSO, MC, second in command of “C” Force, was mortally wounded.  With the assistance of another NCO, (Bill Overton) Staff Sgt. Clark applied a tourniquet to Col. Hennessy’s legs, placed him on a door and carried him to a spot under an iron staircase for safety.  Staff Sgt. Clark went for help and had to pass a blazing building which contained 300,000 rounds of small arms ammunition which was exploding.  The danger of flying bullets and enemy shells did not deter Staff Sgt. Clark, who crept through this barrage and reached the Mount Austin barracks, where an ambulance was sent for.  He returned to Col. Hennessy under the same dangerous conditions with a medical officer who treated him.  Then Staff Sgt. Clark assisted in carrying Col. Hennessy on a stretcher to the ambulance and to hospital while under fire.  Following his capture at Hong Kong in December, 1941, he was interned first at Hong Kong and later transported to Japan, where he worked in the Nippon‐Koken shipyard in the Yokohama‐Tokyo area.

On Jan. 20, 1944, a large fire broke out in this yard, completely destroying a steel shed, ship outfitting stores, prisoner of war mess hall, riggers’ lobby, tool rooms, part of the ship fitters’ shop and mould loft.  I would estimate the damage caused by this fire at about three‐quarters to one million dollars.  Aside from the monetary damage accomplished the production of this yard was reduced by about 60 per cent for a period of at least eight months.  At this time the yard was engaged in building escort destroyers and merchant shipping.  Its tonnage production was about 8,000 tons a month. Considerable repair work also was being undertaken at this time.

This fire was started by Staff Sgt. Clark and Corporal K.S. Cameron, Royal Canadian Ordnance Corps.  The method used was a candle, the bottom of which was surrounded with celluloid shavings accumulated from soap boxes.  The length of the candle determined the time of firing.  This incendiary medium was placed behind some rubbish in one of the little‐used and inspected storerooms.  The Japanese authorities made a very thorough investigation of the damage caused by the fire but were unable to determine its cause or the part played by these two young men.

If the part that Staff Sgt. Clark and Cpl. Cameron played in this sabotage had been discovered, undoubtedly they would have been executed or tortured to death.  This act of sabotage greatly crippled the production of this yard and directly minimized the Japanese war effort.  The contribution to the Allied war effort that these two men made under the handicap of being prisoners of war cannot be over‐estimated.  The occurrence of this fire is part of my official report to my own navy department.  I submit this report to your office with the recommendation that this act of Sergeant Clark and Corporal Cameron be properly recognized and adequately rewarded.  Their conduct as prisoners of war, while under my jurisdiction, was exemplary and fulfilled the highest tradition of the Canadian Army.

As a result of this recommendation and further elaboration provided by two other American officers (Lt. Fisk & Maj. Cagey, MD), Staff Sgt. Charles Albert Clark was awarded the Distinguished Conduct Medal on June 15, 1946, and Cpl. Kenneth S. Cameron was awarded the Military Medal on October 23, 1946. To my knowledge, this is the only DCM awarded to a member of the Canadian Postal Corps and these two men were the only Canadian POWs to receive bravery awards for acts performed while POWs.