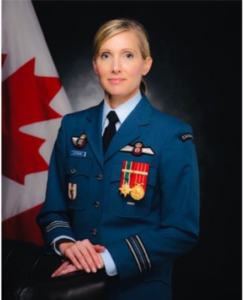 Annie was born in Sorel (Quebec) on November 13th, 1971. She enrolled as an officer in the regular Force in 1989 and started her education at RMC Saint-Jean to graduate in 1994 with a bachelor’s degree in Space Science. In 1995, she was posted to 402 Squadron in Winnipeg to receive a 12 month intensive training and obtain her air navigator’s wings. Following another three month aircrew training, she joins 429 Squadron in Trenton where she had the chance to fly on the CC130 (Hercules) aircraft and travel the world.

In 1999, she reclassified to the Logistics Branch and worked as the Ops O and Adjt for the Postal Unit HQ in Trenton. In the summer of 2002, she became the Financial Inspections, Politics & Procedures Officer with the Land Force Quebec Area (LFQA) comptroller in Montreal. Two years later, she was employed with the 5th Area Support Group (ASG) HQ as the Financial Management Officer.

She then deployed to Kandahar for a ten-month tour as the Joint Task Force (JTF) Afghanistan HQ Financial management Officer. Upon her return in 2008, she was posted once more to Winnipeg with the 1st Canadian Air Division HQ as the Resource management Officer.

A year later in 2009, after a promotion to Major, she became the Compt 4 within the VCDS Comptroller’s Branch. In 2011, she went on to Director – Cost Services where she worked on costing major DND projects.

Since 2013, she is employed within the Canadian Forces Language School (CFLS) as the Deputy Commanding Officer. She is the recipient of a Military Personnel Command Commander’s commendation for the leadership, professionalism, and dedication demonstrated when she took command of CFLS for more than six months following the unexpected release of the Commanding Officer.

Annie is extremely proud to have worn the uniform for almost 30 years of loyal service. She is very grateful to have been able to evolve within this unique community which also allowed her to create life lasting friendships. Annie has accepted a position with the Public Service as the Senior Manager Language Programs and cannot wait to start this new phase of her professional career.