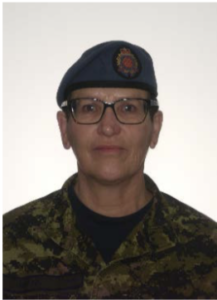 After a short but very rewarding career, Cpl Maahs will retire from the Canadian Armed Forces (CAF) on November 30th 2018 after 12 years of service.

In 1993 Sandra enrolled in Sudbury, Ontario as a Naval Radio Operator and went on to basic training at CFB Cornwallis. Upon completion she went to Esquimalt, BC for trade training and then took her position aboard HMCS Iroquois in Halifax, NS. One of the highlights of her naval career, was the presentation of her Leading Seaman qualification in 1995 by the Right Honourable Jean Chrétien while on exercise in the Caribbean. In 1997 she left the Atlantic and the CAF to stand beside her husband Marvin during his final days.

The next ten years were spent on the road as a long-haul driver covering all of Canada where she logged over a million miles. Landing in North Bay, ON. In 2009 she decided to join the Air Reserve as a MSE Op. After the second round of basic training in St. Jean, QC, and trade training at CFB Borden, ON, she became part of the 22 Wg North Bay transport family where she remained until 2013. Her transport training came in handy when asked to haul over snow vehicles (OSV) out of Northern Ontario after a training mission on the equipment. Additionally she had the opportunity to operate heavy equipment while performing Snow and Ice Control (SNIC).

In 2013 she was overjoyed to accept a position with the transport section with JTFN in Yellowknife, NWT and shortly after transferred to the Reg Force. During her years in the North, she had the opportunity to work with the members of the Canadian Rangers within the communities of Gjoa Haven, Cambridge Bay and Resolute Bay. She proudly served two Generals as their driver and had the opportunity to operate heavy equipment and buses.

In 2016 she needed a new home and with the persistence of Commander Deri at ASU North in Yellowknife, was offered a new position at 1 CAD HQ A4 LOG Winnipeg, MB working as 2 I/C for the RCAF Fleet. Not only did she find a seat that wasn’t moving, but a position she loved next to driving. Working with the fleet managers of the RCAF across Canada, and representatives in Ottawa in regards to procurement and replacement, was without a doubt, the perfect end to her 20-year driving career. She thanks A4 MSE for that opportunity.

Cpl Maahs will eventually retire in Ontario. For her DWD, she has requested a pizza lunch to be held on the 27th of November with her A4 Log family. She hopes they will let her win at cards that day. Well wishes, anecdotes and congratulatory messages can be forwarded to CWO Filiatrault at marc.filiatrault@forces.gc.ca.