Vaccine rollout: Are military leaders the right people for this job? 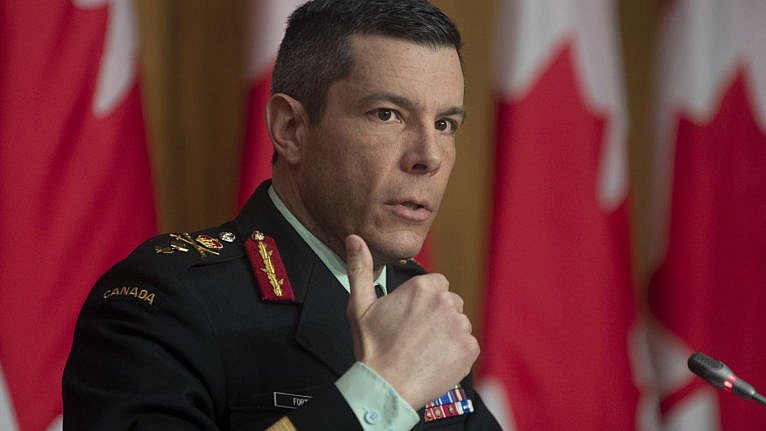 According to the experts, yes, there really is no one better when it comes to tricky logistical issues than military types

It’s strange now to watch the press conference in which Prime Minister Justin Trudeau announced Canada’s plan for getting COVID-19 vaccines into and across the country, and ultimately into people’s arms.

He delivered this news from his customary spot in front of Rideau Cottage in late November, 12 days before Health Canada would announce its approval of the first vaccine, from Pfizer-BioNTech. The names and relative efficacy rates of the four vaccines currently approved for use in Canada now rattle through daily news coverage and casual conversation, but when Trudeau made his announcement, they were all just future question marks.

This would be the biggest immunization effort in the country’s history, the Prime Minister said, and it would have to reach everyone who wanted a vaccine, no matter where they lived.

“To assist in this process, we are standing up a national operations centre through the Public Health Agency of Canada, with the support of the Canadian Armed Forces to coordinate logistics and distribution of the vaccine,” Trudeau announced, adding that Major-General Dany Fortin, a “seasoned officer,” would head up this outfit.

An announcement like this always seems to come with a specific flourish: look, we are so serious about getting things done that we are sending in the military.

But what exactly is logistics? And why are soldiers the ones you tap when you need to handle a big, messy organizational challenge like distributing life-saving vaccines across a sprawling country as quickly as they can be manufactured and boxed up?

At a very basic level, logistics is just stuff and plans. “Logistics is our everyday life, we just don’t know that we call it logistics,” says Brigadier-General Carla Harding, director general support at Canadian Joint Operations Command. “If you’ve ever organized a family reunion, a wedding, a birthday, Christmas, any holiday, you are an expert in logistics.” When they teach this at the Canadian Forces College, they start by organizing a barbecue to make the whole concept less intimidating, she says.

But at a military scale, logistics is vast and complex, not quite like anything in civilian life. It means planning to get people where you need them and when, and then coordinating the transportation, packing, paperwork and storage to have all the needed supplies and equipment meet them where they land, building supply chains as you go. Perhaps if you combined the coordination of people, equipment and goods required to run a large airline with the supply chains of a grocery store and the speed and efficiency of Amazon, you get close to what the military is accustomed to doing—often in far-flung locations and under urgent conditions.

“That’s partly why the Canadian government has us as an insurance policy, we’re here to protect and defend the country, and when we are called upon, it’s generally something that we’re not allowed to fail at,” says John Page, national president of the Royal Canadian Logistics Service Association, now retired after 40 years in uniform as a logistician. “If there is a forest fire, an ice storm, a whole bunch of Russian hordes come over the hill, we have to be able to deal with it in a calm, rational and effective manner, to be able to do the best we can with the resources we have.”

Fortin is currently joined by 50 Canadian Armed Forces members seconded to the Public Health Agency of Canada (PHAC). The agency says “their role is to coordinate the distribution of vaccines safely and efficiently to the provinces and territories as they become available from the manufacturer.”

PHAC does not discuss the vaccine logistics in detail, but says that Pfizer ships its vaccines by UPS Canada to “provincially-designated points of use,” while the federal government has contracts with FedEx Express Canada and Innomar Strategies Inc. to ship the Moderna vaccine to a “central location in Canada,” and the companies then transport the shipments to provincial and territorial delivery points from there. The AstraZeneca and Johnson & Johnson vaccines will be shipped through those same channels.

This mirrors the “node system” the military employs as the most efficient way to handle transportation (think of the hub-and-spoke system of airports, where routes from various cities converge on a few central locations, like Toronto domestically or Frankfurt internationally, and then branch out). When the military builds a new supply chain for overseas work, its default air embarkation point in Canada is CFB Trenton and Montreal is the defined seaport, Harding explains, and even though it might seem inconvenient to bring something from Edmonton to Montreal to ship it out, using these well-worn paths makes everything easier. “When things get really complicated, bringing in simplicity often just makes it move faster and more effectively and more efficiently,” she says.

The arrival of COVID vaccines required creating brand-new supply chains to meet the the cold storage requirements (the Pfizer vaccine must be stored at -70C and Moderna at -20C, though regulators have relaxed some of those guidelines as they learn more about how the vaccines behave), and Harding says that’s exactly what the military does every time it takes on a new exercise on foreign soil, in a combat zone or the Arctic. “We do this every time we move anywhere,” she says. “So it made perfect sense when they said ‘How do you create a new supply chain in short notice?’ [that] it’s us. End-to-end all the time.”

As for how exactly they do that, Page describes a system that sounds a bit like a set of ready-made Lego bricks that can be clicked into place as needed. There is a procedure for everything—loading equipment on trains, unpacking shipments, planning rations, setting up field accommodations, transporting things over long distances by ship, air or land—so they’re rarely starting from scratch. And because the military is used to doing this over and over in different environments, they have a systematized way of thinking through what needs to be done and how to do it. “So we have a series of headings and you work through each of these headings and answer your questions: what do I need, what don’t I need, what’s the best way of doing it, is there another way of doing it?” Page says.

Following the 1998 ice storm, he was the principle Logistics Staff Officer to Colonel Andrew Leslie, Commander of 1 Canadian Mechanized Brigade, and he was in charge of corralling 5,000 troops from western Canada to assist in the so-called “dark triangle” south of Montreal, which went without electricity for weeks. Page could have sent the soldiers out immediately with nothing but the rucksacks on their backs, but he decided to wait the 48 hours it took to load and deliver all their equipment by train so they could go out to help fully equipped. “We’re called in at the last minute to help everybody, so we have to be able to look after ourselves to deliver support to Canadians when they need it,” he says.

Asked how military logisticians deal with problems or expected factors, Page pauses and then answers in a quizzical voice that makes it obvious the question doesn’t make any sense to him. “Um, that’s normal,” he says. “That’s what we get paid for, to solve all those problems. That’s what we do.” Problems aren’t an unwelcome hiccup in the plans, they are the plans.

Harding says their running joke is, “No plan survives first contact.” Uncontrollable factors like weather and location are accounted for from the start, with the expectation that they can change without warning. Harding is from Saskatchewan, and to her, all of this is like trying to catch a flight out of Regina in the winter: everyone knows there’s a decent chance you’ll be delayed and no one freaks out if you call work to say you can’t get there until tomorrow. “It’s been really funny watching non-logisticians go, ‘Oh my goodness, we’re a day late,’” she says of the vaccine rollout. “And you’re like, ‘Yessss?’” She unfurls that last word slowly, the way you might speak to a mid-meltdown three-year-old.

The angst around statistics showing that 100 per cent of the vaccines received have not been administered by the provinces is similarly puzzling to her. A critical part of supply chains is what’s known as the “last mile.” In Amazon terms, that’s the package on the truck headed for your neighbourhood and then placed on your porch; in a vaccine context, that’s the dose being drawn up by the syringe to be stuck in your arm, and the planning involved in getting you and the nurse holding the needle to the clinic for that moment. There has to be buffer to keep a system running smoothly, so to a logistician, the fact that a certain amount of vaccines are hanging around at any given time only makes sense.

“Look at our grocery stores. Our grocery stores are the slack in our food chain,” says Harding. “If it was just-in-time delivery, you’d be standing beside the cow waiting for the milk to come out. Every supply chain is about slack.”

Canada’s supply of vaccines has increased and stabilized in the last couple of weeks, but any variability—positive or negative—can gum up the works, says Mahesh Nagarajan, a professor of operations and logistics at the University of British Columbia’s Sauder School of Business. The slowdown in February was a problem, but so in its own way is the sudden uptick with Canada approving the AstraZeneca and Johnson & Johnson vaccines. A “high throughput” system can use up supply as fast as it comes in—picture a bucket being filled from the top, with a large hole in the bottom that prevents the water from building up—Nagarajan says, but the trouble is that those systems are not built to handle fluctuation. And a mass public vaccination campaign is an inherently unpredictable business: people can have adverse reactions, some of your vaccination team might get sick or have to quarantine, shipments can vary.

“At this point, though, with this assured supply that is coming in, we have to move to a place where we don’t sit on large inventories of vaccine,” he says. “So you have to build these vaccination centres with extra capacity to be able to absorb the variability in supply.”

Other issues have emerged that go beyond on-the-ground logistics. In Ontario, where retired General Rick Hillier is in charge of the vaccine rollout, effectiveness and efficiency has been a major question mark, with the province not getting its vaccine booking website up and running until March 15.

Harding understands the sense of urgency from the public given that every delay is a day someone isn’t getting immunized, but as someone who handles logistics professionally, she advises a sense of calm and perspective. “We have to keep reminding ourselves, we stood up something completely new in a couple of months—completely new supply chains at unprecedented volumes,” she says. “We have a massive spike in supply and demand right now, it will just take some time to equalize.”

At a certain point, the principles of military logistics planning start to sound like pretty solid philosophical advice for, oh, I don’t know, living your life in the midst of a pandemic?

Sometimes it’s better to slow down a bit and make sure you have everything you need, rather than rushing to do something as quickly as possible. You have to take care of yourself in order to help others. Keep things simple and do what you know will work. Have a bit of patience to see if something is working before you switch it up. And problems and unexpected developments are not wrenches thrown into the works—they are the works.