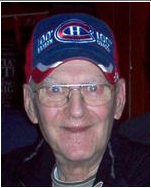 Born in Quebec City, he was a son of the late Lila May (Russell) and Joseph Walsh.

Gerald (Knobby) started his military path first by joining sea cadets, then reserves only to join the Navy as a Victualling Storesman.  His first posting was HMCS Iberville.  Then he went on to serve on HMCS Crusader, Nootka , Athabaskan , Kootney, Iroquois,and Saguenay.  He also worked at both Stadacona and Dockyard Clothing Stores.  After retiring he rejoined as a Class B Reservist and worked with the Nova Scotia Tattoo as their Storesman.

He will be sadly missed by his children Kevin, Jane, Sharon (Jeff Lawrence), Lisa (Frank Dwyer); his grandchildren Arlea (David Watts) , Lindsy, Ashlea, Stacey, Isabelle; and great grandson Colby who he admired every time he came into the room and great granddaughter Harmony.

Gerald was predeceased by his wife Carol (McVean).

Cremation has taken place. A graveside service will take place in Dartmouth Memorial Gardens at a later date.

Online condolences may be sent by visiting www.coleharbourfuneral.com