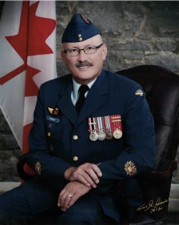 James “Warren” Tourout, age 59, of Halifax passed away 23 October 2017.  Born in Stephenville Crossing NL, he was the son of Hilary and Priscilla Strickland of Piccadilly.

He is survived by his wife of 37 years, Glenda (Humphries), son, Brandon; and daughter, Shannon;

Warren loved his military career and was extremely proud and honored to have served his country for over 37 years.

He served as a Supply Technician in all three elements of the Regular Force as well as 11 years with the Reserve Force in Halifax.  He enlisted in London, Ontario and his first posting was to Edmonton, AB where he met Glenda who was also a fellow Supply Technician.  They were married and then posted to Petawawa where he spent 5 years with 2 Service Battalion.  He participated in 3 RVs and 4 deployments to Norway.  Moving on he was posted to Ottawa where he worked in DPSA and Uplands.  He did a tour of the Golan Heights during that period but the highlight of his Ottawa posting was the adoption of their two children Brandon and Shannon.  He then ventured to his naval experience in Halifax as Chief Storesman on HMCS Athabaskan, participating in 2 NATO exercises during that posting.  He then transferred to the Reserve Force and held a Class B position with 72 Comm. Group for over 10 years.  He subsequently transferred back to the Regular Force and was posted on IR to Ottawa working on the MHLH project.

He retired from the Regular Force in 2014 and initially worked with the Canadian Corps of Commissionaires at Nova Scotia Power Corporation.  In August 2016 he had started working with National Defence as a procurement clerk in Stadacona (CFB Halifax) but his time there was cut short by illness.  Unfortunately his plans of clam digging, trouting, hunting and travelling were also put on hold.

A memorial service was held on Thursday, October 26, 2017 in St. John the Baptist Parish Church, Halifax, NS.  Interment will be at later date in Beechwood National Military Cemetery, Ottawa.

From a colleague:  Warren was a great guy and a mentor to me. Taken far too soon.