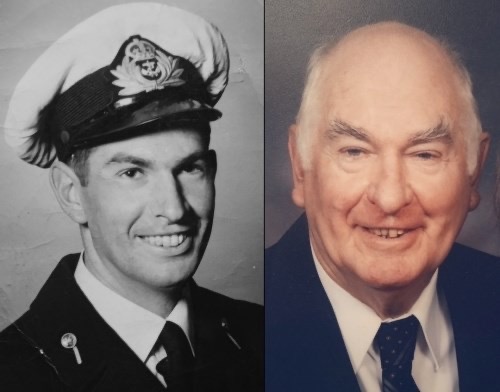 Ray, age 87, passed away in Victoria 25 November 2021.  He is survived by his wife Carol, sons Mark (May), Ryan (Ylan) and daughters Heather and Wendy.

Ray was born in Antigonish, NS, and always told the story of being brought home from the hospital in a horse-drawn sleigh.  He was valedictorian of the first graduating class of the Rural High School in Brookfield, NS.  He graduated from Mount Allison University in Sackville, NB, the first of his family to do so, with a Bachelor of Commerce degree.

Ray joined the Royal Canadian Navy in 1952 and was commissioned as a Sub-Lieutenant in 1955.  During his 27-year naval career, his specialty was in the field of logistics and supply, the business side of the Forces.  He served on many ships including HMCS Crescent, Ontario, Antigonish, Nonsuch, Scotian, Cornwallis, Hochelaga and Stadacona. A career highlight was a posting to the US Naval Supply Center in San Diego, California, where he was recommended for the US Navy Commendation Medal for his duty as Director of the Freight Terminal.  He was a graduate of the Canadian Forces Staff College, and spent many years teaching at CFB Borden.

After retiring from the military, he joined the Public Service of Canada as senior management consultant at CFB Esquimalt, finally retiring in 1991.

Always interested in sports, Ray was active in golf, tennis, baseball, lawn bowing, and swimming.  He served several years as chair and/or board member of several United Churches, and enjoyed activities including participation in various small groups, walking, study, and discussion.  He served as President of the Royal Oak Probus Club.  True to his rural background he was an enthusiastic follower of standardbred harness racing as both spectator and owner.

Many of Ray’s fondest memories came from his property in the Muskoka’s, which was on 100 acres of land and had a lake which was formed above a series of beaver dams.  Over the course of several summers, he and Mark built a cottage on the shore of the lake, and the family spent many happy days in that idyllic setting, far from the cares of work and school.  He loved that place, and the family likes to think that his last thoughts were memories of the family together there.

“Stand at the water’s edge, Dad, in the evening stillness, faithful Sparky by your side. Slap the water gently with your paddle, and listen closely for the beaver’s reply: calling you home.”