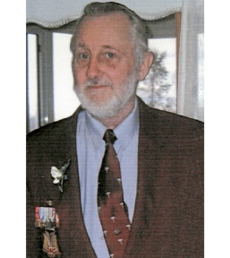 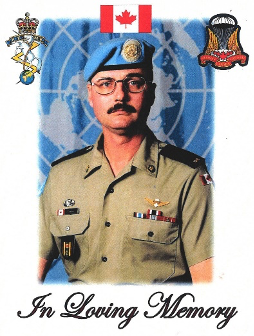 Jim left his hometown of Leamington in 1954 to begin a military career in the Canadian Army Soldier Apprentice Plan at the RCOC School in Montreal.  His following years of service included postings to the remote areas of CFS Masset and CFS Alert in the Canadian North.  His CFB Petawawa posting included unaccompanied tours with the UN Emergency Force in both Egypt and Cyprus.  After completing the Basic Parachute Course in Edmonton in 1975, Jim was promoted to Warrant Officer and posted to the Cdn Airborne Regiment as a Regimental Quartermaster Sergeant.  He completed multiple jumps from ‘perfectly serviceable’ C130 Hercules and Chinook helicopters.  The following years included multiple services in Europe (Soest, Lahr and Baden) with the 4 Canadian Mechanized Battle Group, then home to CFB Kingston and retirement.

In 1984, following 30 years of distinguished service, James and Marlene Steed retired to their small acreage north of Kingston in Harrowsmith, Ontario.

A private ceremony with family and close friends will commence on Saturday at the Township Chapel of the GORDON F. TOMPKINS FUNERAL HOME in Kingston with internment at the Harrowsmith Cemetery.

Memorial donations, for those wishing may be made to the Wounded Warriors of Canada.