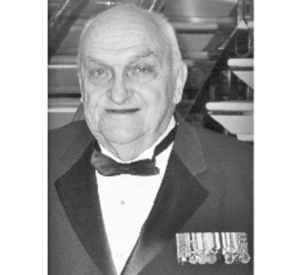 Victor, in his 88th year, was given the gift of life and now he had to give it up.  It was hard, but he was grateful, having lived his life well and with purpose.  He passed away peacefully with his family by his side in Ottawa on March 4, 2020.  He was a beloved husband and best friend of Madeleine for almost 64 years.  He was a generous and loving father of Patricia (Rene), Susan (John), Alison (Roger), Monica (Pierre) and Michael (Janice).  He was an inspirational grandpa to his ‘poodle dogs’ – Jean-Francois, Patrick, Jonathan, Maria Christiane, Emily, Alexander, Madeleine, Erica, David, Kate, Mathieu, Emma, Willis, Benjamin, Zachary, Maya, Rachel and Eden and seven great-grandchildren.

Victor had a proud, vibrant and exemplary military career with significant accolades and recognition, impressive by any standards.  In 1988, the Nobel Peace Prize was given to the United Nations Peace-Keeping Forces for which Victor played a significant role.  It is a cherished award.  He also received the Order of Military Merit, the Special Service Medal NATO + OTAN bar, Canadian Peacekeeping Service Medal, United Nations Emergency Force Middle East UNEF II/UNEFME, International Commission for Supervision and Control Service Medal (ICSC Vietnam), Queen Elizabeth II Silver Jubilee Medal, the Queen Elizabeth II Golden Jubilee Medal and the Canadian Forces Decoration with two service bars (CD).  His almost 50-year military career began as an army cadet at the age of 14, then as a soldier in the regular army. He was also part of the supplementary ready reserve.  Some of his career highlights include deployment to Germany during the Cuban crisis, posted to 29 Movement Control Regiment in England as the operations officer, posted to Mobil Command HQ as senior transportation staff officer for the Montreal Olympics, posted to Egypt as commanding officer of the 73 Canadian Battalion.  During his career he worked in 27 different countries and took 17 trips to Norway for NATO planning.  He was seriously injured in the Sinai Desert which resulted in three hip replacements.

Victor and Madeleine were active in the community and received the Ottawa City Council volunteer award for their significant contribution in the Community Volunteer Tax Program. Victor will be remembered for his love, integrity, guidance and wisdom.  It was always about family for Victor – he was so proud.  He was an expert storyteller, ridiculously witty, with a sharp brilliant mind.  He had a life-long love affair with licorice and scotch.  He was unforgettable – with that endearing twinkle in his blue eyes and that unsurpassed laugh.

Victor was a generous man and supported numerous charities, so as an expression of sympathy, memorial contributions may be sent to any charity of your choice.

He was my Phase 3 Course Director in 1969.  Staff were Bill Fletcher and Tony Gumpert.  It was the summer when the RCASC was disbanded and we were essentially “flogging a dead horse” before heading for our postings.  My classmates were Gary Campbell, Austin Campbell, Rick Burton.

I remember Major Vic Smith having arranged a one-week tactical patrol of the Blue Mountain trail.  Not that easy with full gear, but also not that trying since there was a 3/4-ton truck following with tents, steaks and beer.  He was the one that threw the thunder flashes (he was just back from Vietnam) and Bill or Tony would jump us in ambush.  I remember Tony pinning me in one occasion and shouting “du schweinhund “, I yelled back in German he did not know I spoke German} and it became the joke of the day.

I had the honour and pleasure of serving with Vic three times, once as a newly commissioned officer in 2 Tpt Coy RCASC, then as a fellow instructor at the RCASC School, and later as a staff officer when he was the Senior Staff Officer Transportation at Mobile Command. Everyone who met Vic experienced his sly sense of humour, but he was also a knowledgeable and diligent officer and a real gentleman.  I learned much about life and soldiering from him.  I’m sure you will all join me in offering condolences to Madeleine and his family.