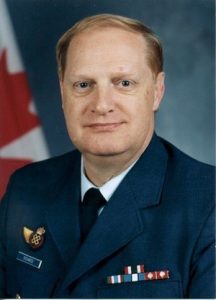 Bob, 68, passed away Thursday, July 30th at home in West LaHave, NS. Born in Halifax, he was the son of the late James Patterson and Dorothy (Pollock) Richards.

Bob retired from the Canadian Forces after 36 wonderful years of service. He had a very successful career during which he dedicated his professional life to the military. He had a great love for life and people, and he was energized by really getting to know the people whom he met during his various postings to such places as Quebec City, Lahr, Winnipeg (twice), Moose Jaw, Cold Lake, Toronto, Borden, Ottawa, and Washington, DC. His positivity was contagious and reassuring when times were tough for the people around him. As the senior Logistician within the Air Force, “Officer” Bob mentored many of the most successful and senior Air Supply and Transport Officers serving our country today.

Bob always wanted to retire to Nova Scotia which he referred to as God’s country. He settled easily into retirement and became an avid gardener, boater and community volunteer. He loved to share stories, especially over a bottle of fine red wine. Boating the LaHave River and Islands on his treasured Camelot was very special.

There is an opportunity for a Logistics Specialist.  MODIS already has won the work, so no need to have to go through the bid process.  The requirement is for a… Read More

Please see the July issue of the newsletter The Logistician. In order to have access, copy and paste the links below on your browser.  If you prefer, you can export… Read More