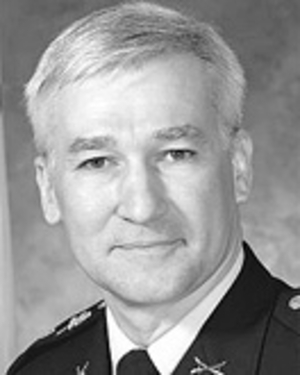 At his death, Gen. Pouliot, age 49, was Dir- Gen. LOGISTICS/ J4 MATERIAL at DND/HQ. He had been with the Canadian Armed Forces since 1973. A graduate of College Militaire St-Jean he held a Masters in Project Management and was a certified member of the Society of Management Accountants (CMA). He served overseas with distinction in the former Yugoslavia, the Middle East and latterly in Afghanistan. In 2003, he was chosen to command the Theatre Activation Team for the deployment of the 2000 troops to OPERATION ATHENA in Kabul, Afghanistan for which he received the Governor General Meritorious Service Medal. (The citation is noted below).

Respected and honoured in the military for service in Canada and abroad, Marc Pouliot was, above all, a good man: a loving and beloved husband, devoted father and faithful son to his parents and his country.

”…. Greatness and goodness are not means, but ends! Hath he not always treasures, always friends, the good great man? …love and light, and calm thoughts,” (Samuel Taylor Coleridge)

The family asks that a donation be made to either a trust fund set up for his young daughters at the TD Canada Trust Barrhaven branch (br#2831) account #6278881 or, to the Heart and Stroke Foundation.

Meritorious Service Decoration – Military Division; awarded 26 March 2004, invested on 26 November 2004
“Colonel Pouliot was Commander of the Theatre Activation Team for Operation ATHENA – the Canadian contribution to the International Security Assistance Force in Kabul, Afghanistan, from April to August 2003. He was responsible for commanding the advance headquarters, negotiating and setting up all logistical arrangements, planning and overseeing the contribution of a 1900-person camp in a remote area of Kabul, and organizing the reception of all equipment and personnel. Colonel Pouliot’s strong leadership, resourcefulness and dedication were exemplary and greatly influenced the successful outcome of the Operation.”