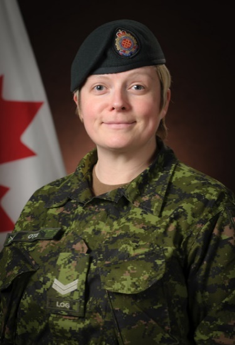 A beloved daughter, granddaughter, sister, niece, cousin and friend, Alexandra Otis left this world unexpectedly at age 38 on October 3rd, 2019. Born on March 27th, 1981 as Alisen McLeanns in Mission, British Columbia to Laara McLeanns & John McLeanns, she was a bundle of energy, light and sparkle and was lovingly nicknamed “Ali Choo” by her older brother Seann. Alex was an avid lover of nature, the environment, animals, yoga, meditation and music. She had an incredible vibrant spirit that touched everyone who met her. She was adventurous and loved the feeling of the open road while taking long rides on her Harley.
Alexandra found her place in the Canadian Armed Forces and her entire family took great pride in her accomplishments in reaching her rank of Corporal. Driving was her passion and she absolutely loved her career. In 2017, Alex relocated to Greenwood, Nova Scotia to be close to her father, extended family and further her career in the CAF. She will be so missed and lovingly remembered by her parents, John McLeanns and Laara McLeanns; step-father, Mike Alexander; and brother, Seann McLeanns.
A celebration of life will be held at 2:30 pm, Sunday, October 20th in St. Mark’s Protestant Chapel, Church St. (Building 69), Greenwood, NS. The family invites attendees to a reception to follow the service to share stories of Alexandra at the Annapolis Mess, CFB Greenwood.
In lieu of flowers, the family is requesting that a donation be made in Alexandra’s name to an environmental charity of their choice or donate to Hope for Wildlife 5909 NS-207, Head Chezzetcook, NS, B0J 1N0, (902) 407-9453. Online guestbook may be signed by visiting: www.middletonfuneralhome.com