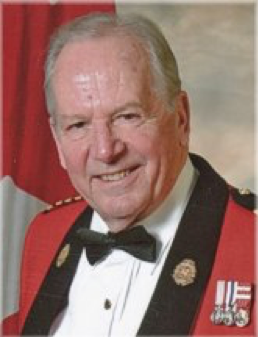 After enjoying a long, happy, healthy life with a wonderful lady and opportunities to actively pursue a variety of interests, John died March 26, 2018 in his 90th year at the Uxbridge Cottage Hospital.

Born in Toronto, April 9, 1928, he attended North Toronto Collegiate Institute, Jarvis Collegiate Institute (Grade 13) and the University of Toronto, graduating in 1950 with an honours degree in chemical engineering.  He worked at DuPont Canada Incorporated for 41 years attaining various sales manager positions in the Textile Fibers Department and retiring in 1991.

While at university, he enrolled in the Canadian Officers Training Corps leading to a commission as a Lieutenant, Royal Canadian Army Service Corps in 1949.

John served in the Reserve Militia of the Canadian Armed Forces for 43 years and was a former Commanding Officer of the 709 (Toronto) Communication Regiment, Toronto Service Battalion (March 72 to June 74), Commander of Toronto Militia District (June 76 to July 78) and Honorary Lieutenant Colonel and Honorary Colonel of 25 (Toronto) Service Battalion from 1998 to 2008.

In lieu of flowers, the family asks that contributions be made in John’s memory to the Uxbridge Cottage Hospital Foundation.