The following is provided courtesy of Toronto Metro News: 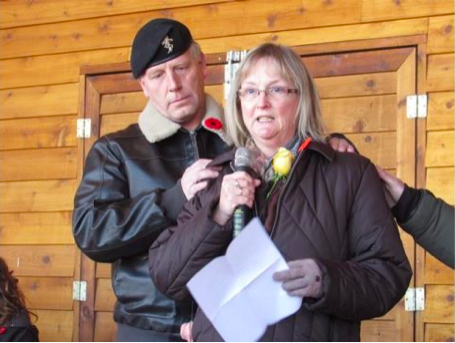 STRATHMORE, Alta. — Former Master Cpl. Thomas McKenzie was a solitary man almost to the end of his life.  McKenzie, 55, was a Canadian Forces vehicle tech for 12 years before leaving the military.  For the past decade he has been alone, with just a single friend and no contact with estranged family members until his plight was raised by a nurse who was providing palliative care for him in the town of Strathmore, about 70 kilometres east of Calgary.

The nurse contacted members of Calgary’s military community asking for veterans to sit with him so he wouldn’t die alone of throat cancer.  “I was a reservist medic and the first thing you learn is no one dies alone and I couldn’t bear for this guy to die alone in my hospital when I knew we could do better,” said Nicki Armstrong, a retired corporal who attended the memorial.  “At the end of my shift I posted ‘he’s got nobody’ and by the time I woke up it had gone to Newfoundland and back and someone was at his bedside.”

That same group arranged a memorial for McKenzie at the Kinsmen pavilion in Strathmore on Saturday.  “No veteran should ever be alone and no veteran should ever die alone. We need to take care of each other,” said Heather Vanderveer, a member of the volunteer Ghost Squadron in Calgary.  “There’s so many that fall between the cracks and there’s some that are so angry at the military afterward they want nothing to do (with it).

Vanderveer and her husband Scott helped organize the memorial and with the costs of the funeral. They also arranged for a Quilt of Valour, a handmade quilt given to military members expressing gratitude for their sacrifice to Canada, be prepared for him.  Vanderveer was one of those with McKenzie when he died.  “We wrapped him in a Quilt of Valour and we told him that the people of Canada loved him and cared for him.”

Retired Canadian Forces Maj. C.J. Wallace had McKenzie as his driver when he was stationed in Calgary in the mid-1980s.  He said he was proud, a perfectionist and “a good soldier”.  He tried to track him down a decade later.  “I guess about 1998 I started looking for him again and had gone through about three-quarters of the T. McKenzie’s in the Calgary phone book but couldn’t find him unfortunately,” said Wallace.  He wasn’t surprised McKenzie had cut off all contact from friends and family for the past 10 years of his life.  “I somewhat know how he feels and I do the same thing. I disappear down in Texas for six months down into the backwoods.”

It had been 10 years since Leslie McArthur had seen her brother. She told the 75 people attending the memorial her brother will always be known as “Tommy” to her family.  She said she owes him her life.  “He was my stem cell transplant match during my battle with an aggressive form of leukemia in 2001,” she said.  “For that my family and I are eternally grateful to him and it gives me strength and peace to know I will always carry a part of him with me.”

Mark Erwin was McKenzie’s only friend.  He said he lived in an RV park and mostly kept to himself.  “We were best buddies. Tom was a loner.  He sat in one little corner by himself.  People knew to leave him alone.  If he wanted to have you over — he’d invite you,” he said.  Erwin said McKenzie would have hated all the fuss in his honour but felt it was only right to honour him.  “There’s far too many vets falling through the cracks and I don’t think it’s right and just coming here they’ve just gone over any expectations that I had.”