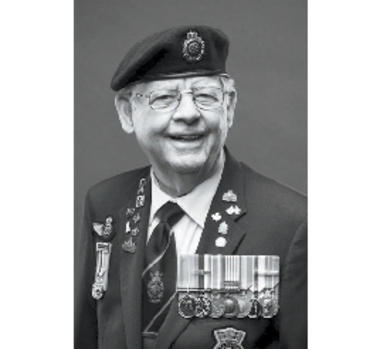 With profound sadness, we share the passing of John Makichuk at age 87 on 31 March 2022.  He was a family man who loved and was loved.  John was a military man who believed in the virtues of planning, organization, and timeliness.  He was also a gentle and generous person who quietly influenced others through simple kindness and good humour.  But first came family.

John was born and grew up in Manitoba during the depression and war years, the youngest of six children of Saffron and Effie Makichuk.  In 1956, he instantly fell for his life love, Betty Rubeniuk, at the wedding of his sister and her brother.  Betty was a bridesmaid; John was a groomsman.  Within a year, they were bride and groom, starting an unshakable marriage that lasted more than 56 years until her passing in November 2013.  Together Betty and John raised a tight-knit nuclear family that followed his career path across Canada and overseas.  John is survived by sons, with whom he took immense pride: Bob (Wendy) and Tom (Jean); and, grandson Michael (Rachael), on whom he doted.  He also leaves several nieces and nephews in western Canada.

As a military man of his time, John was a cold warrior and a peacekeeper.  He joined the Royal Canadian Ordnance Corps in 1953, serving on the still-hot Korean DMZ, twice with NATO in West Germany, and at bases in Quebec, Ontario, and Manitoba.  In 1974, commissioned from the ranks as a logistics branch officer in the Canadian Armed Forces air element, John served in Edmonton, Winnipeg, at National Defence Headquarters in Ottawa, and with the United Nations in Egypt.

Post-uniform, at the Department of National Defence, he was a civilian procurement manager on counter-espionage projects that one shouldn’t talk about.  He retired after 41 years of service to Canadians to pursue a quiet life in Convent Glen, Orleans, Ontario. There, he devoted himself to Betty and their now-grown boys, and later found time to learn the saxophone and become an active member of 410 Wing RCAF Association, the Korea Veterans Association, the NATO Veterans Organization of Canada, and the Royal Canadian Legion Branch 632 Orleans.  John was also a lifetime member of the Royal Canadian Ordnance Corps Association and a founding supporter and benefactor of Restoration 613 Ministries in Ottawa.

John demonstrated fortitude and strength, remaining in charge of life decisions through a brief health crisis that peacefully took him through his last moments, surrounded by love and family at the Ottawa Hospital General Campus.

A visitation will be held at McEvoy-Shields 1411 Hunt Club Road, Ottawa, Ontario at 11:00 a.m. on Saturday, April 9, with funeral service to follow in the Chapel at 12:00 p.m. Interment will follow at Highland Park Cemetery, Magee Side Road, Carp, Ontario.

In lieu of flowers, you may wish to consider a donation to the Juno Beach Centre at junobeach.org.