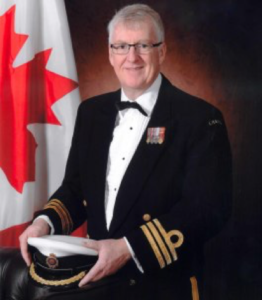 It is with great sadness that the family of Commander Charles Lauchlin MacKinnon announces his peaceful passing surrounded by family and friends in his home, after a 2 ½ year battle with a rare form of liver cancer (Cholangiocarcinoma) on Wednesday December 5, 2018.

Charles always put his family ahead of everything even in his last days where he would shield them from the discomfort and anguish this disease caused him. He will be remembered by his wife of 39 years Mary, his son Jonathan (Marlene), his daughter Meagan (Jason), and 2 grandchildren who he loved dearly (Lauchlin and Avery).

Born in 1954 in Sydney, Nova Scotia, Charles covertly enlisted in the Canadian Navy a few years after attending St Mary’s University. Commander MacKinnon served 35 years for a country he truly believed in and gave his family the opportunity to tour the world with him (Germany for 4 years, Netherlands for 4 years, Virginia, USA for 4 years). He served on the naval ships HMCS Qu’Appelle, HMCS Fraser, and HMCS Protector. He completed his service with the Chief of Maritime Staff team in Ottawa.

Family life and military life is how we will remember this great man. On retirement, Charles and Mary took their last posting to Calgary in 2014 where his children resided, to convince everyone how great his golf swing was, and where he would meet his future grandchildren.

In lieu of flowers, the family wishes that any donations in his name be made to the Canadian Liver Foundation. Charles will be forever missed and will never be forgotten. Fair winds and following seas.