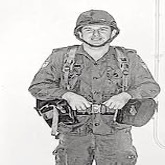 With great sadness, we the family announce the passing of Allen Blair MacInnis on November 30, 2022, in Ottawa, Ontario, surrounded by his loved ones. Allen was born in Sydney, N.S., on April 29, 1962. Allen is survived by his father, Roderick; siblings, Roddie, Elaine, Michael, Stephen and Debbie; daughter, Miranda; son, Bryce; grandchildren, Eden and Gavin and many relatives and friends who cared for him. He was predeceased by his wife, Jane Marchildon MacInnis and son, Jordan Allen MacInnis.

Sgt. A.B. MacInnis served in the Canadian Armed Forces from 1979 – 1999 and was a part of peacekeeping missions around the world. He became a member of the Royal Canadian Legion Branch #351.
Allen loved his family, who were his whole world. He enjoyed the city atmosphere and spent his time taking in all that city life had to offer. He will always be remembered for his generosity and willingness to help those around him.
Cremation has taken place through Whelan Funeral Home and a private funeral service will take place in St. Alphonsus Church in Chapeau, Quebec at a later date.
He was privileged to leave behind his legacy and to have lived life on his own terms. His memory will live on through his children and grandchildren. Always loved and never forgotten, Nulli Secundus.