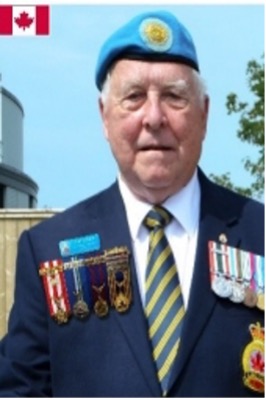 He was a proud military Veteran who served in the Royal Canadian Army Service Corps and Logistics Branches of the Canadian Forces since 1958 until his retirement from the Regular Forces in 1989.  During his career, he served in various locations throughout Canada as well as two NATO tours of duty (Germany) and one tour with the Canadian Contingent of the UN Peacekeeping Forces in Golan Heights, Israel.

After retiring from the Regular Forces, Selby continued his involvement with Canadian Forces Reserves as a Cadet Instructor Cadre Officer with the Army Cadets until retiring at the rank of Lieutenant in 2000.

Due to COVID-19 restrictions, cremation has taken place and a Celebration of Life will take place at a later date.  For all those who would like to attend the service from the comfort and safety of their homes or who are out of the province, the service will be live-streamed.

Donations in Selby’s memory may be made to the Canadian Cancer Society – NL, Royal Canadian Legion St. John’s Branch No. 1 and Army Cadet League of Canada – NL.

To send a message of condolences or to sign the memorial guest book, please visit www.barretts.ca and follow the link.

I just read on FB our Dear friend Selby Luffman has joined the Advance Party…. it is a sad day for the RCASC….such a wonderful person, a fine soldier, Selby was my lead driver for two years in Germany, I could not have asked for a better, more loyal person to do the task…….I offer my sincere condolences and prayers to Helen and their family and friends at this difficult time…Selby will be deeply missed by all who knew him… a true Newfoundlander….A soldier died today….God Bless….May He Rest in Peace…..