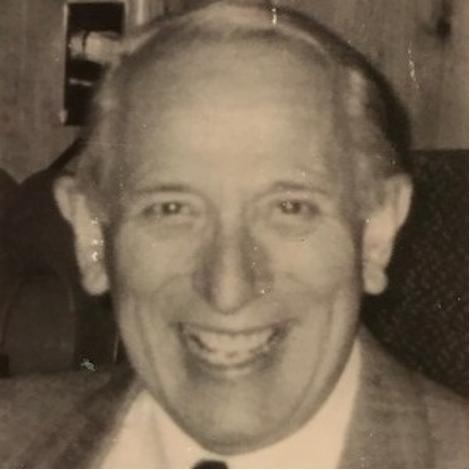 Cal passed away peacefully on 5 October 2020 after a brief illness in his 93rd year.  He was pre-deceased by his first wife Anne-Marie (nee Callaghan), and his second wife Katherine Agnes (nee Everett).

He is survived by his sister Barbara Rhodes (Owen Sound), and children Kevin (Robin), Monica (Rick), and Hugh (Terri).  He was so proud of his grandchildren Meghan (Brendan), Liam (Shannon), Anne, and James; as well as his great-grandchildren Asher, Rory and Fionn.  He is also survived by Katherine’s children Chris (Jennifer), John (Ian) and grandchildren Cameron and Chloe who he embraced as his own.  Cal is also survived by numerous nieces and nephews, and his “adopted” daughter Katherine Larter who was a great friend to the family.

Cal was born in Toronto, attending Humber Collegiate and the University of Toronto, where he was a competitive swimmer.  He was an adventurer at heart joining the merchant marine and working in Lake Louise, Whitehorse and Boston after leaving HCI, all while earning his private pilot’s license.  He shared fond memories of the cottage at Big Bay Point.  After graduating U of T, he worked for the Ford Motor Company before enlisting in the Canadian Army during the Korean conflict.

His military career took him across Canada, the U.S., the UK, Europe (S.H.A.P.E.), and the Middle East (UNTSO/UNDOF).  He was wounded by a sniper in Lebanon during the 1975 civil war.  He played hockey and swam competitively while in the army.  After leaving the regular force he served in the reserves, spending a total of 42 years in uniform.

It was after a transfer to Halifax in 1974 that he became a proud Nova Scotian.  Retiring from the regular force, he began a second career with the Nova Scotia Power Corporation.  During this period, he travelled extensively throughout the province and fell in love with Nova Scotia.  He made enduring friendships at NSPC and especially treasured his time flying with Edgehill “Edge” Dauphinee.

Outside of family, Cal was committed to the Royal Canadian Army Cadets, serving as president of the Nova Scotia Army Cadet League and on the national senate for many years.  He was collaborating on a history of the cadets in Canada in the final years of his life.  He also served for many years on the boards of the Army Museum Halifax Citadel and the Dartmouth Seniors’ Centre.  He was a warden and parish council member at St. Andrew’s Anglican Church.  He was awarded the Queen’s Golden Jubilee Medal, and received an HRM Volunteer of the Year Award in 2004.
His passing will leave a huge hole.

In keeping with his wishes, cremation has taken place and there will be no visitation. Due to Covid-19 restrictions, a private family service (by invite only) will take place on October 15, 2020 in Atlantic Funeral Home, 771 Main St, Dartmouth.

On-line condolences may be shared by visiting www.atlanticfuneralhomes.com (Dartmouth Chapel)