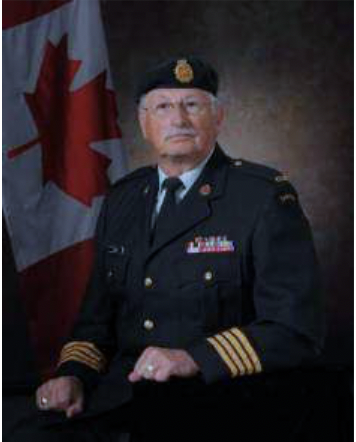 It is with deep sorrow that the Royal Canadian Logistics Service Association (RCLSA) announces the sudden passing on Wednesday, 1 April 2015 of LGen Bill Leach, CMM, CD our Colonel Commandant since 2011.

Lieutenant General William (Bill) Charles Leach, son of a career army officer, was born on November 6, 1942, in Sarnia, Ontario, and grew up in St Lambert, Quebec. He graduated from the Chambly County High School (now Chambly Academy) and enrolled in the Canadian Army on 8 September, 1960, and then attended CMR and RMC (number 6454) as an ROTP cadet.

As a cadet, his French language fluency and academic stature prospered. Overall he displayed the drive, spirit, and organizational skills that served him so well throughout his career. He was a key player in the management of the college swim and water-polo teams, and played at the inter-mural level on his squadron volleyball, football, and hockey teams. He attained the well earned appointment of Cadet Senior Sports Officer (CSSO).  During summer training Bill distinguished himself as top officer cadet at the RCOC school at Longue Pointe. He graduated from RMC in 1965 with a degree in economics and commerce and was commissioned into the Royal Canadian Ordnance Corps. He later graduated from the Canadian Forces Command and Staff College.  After more than 40 years service in the Canadian Army and the Canadian Armed Forces he retired in September, 2000 from his positions as Chief of the Land Staff and the Commander Land Force Command in the rank of Lieutenant-General

As his career progressed Bill demonstrated exceptional leadership and organizational ability. He had that rare combination of strategic vision and understanding of the sailors, soldiers and aviators who actually made things happen. Colonels, cooks, chiefs, corporals, commanders: to Bill they were equal members of the military team: and he loved them all.

During his career he held command and staff appointments at the tactical, operational and strategic levels.  As a logistician he served in supply, finance and operational support positions in both static and deployed units.  He served with the British Army on the Rhine (4 UK Armoured Division) in Germany and in the Headquarters United Nations Emergency Force, Ismalia, Egypt.

He demonstrated his leadership and logistics skills in increasingly more senior and varied logistics positions:  Air Command Comptroller; Director of Logistics Plans and Operations on the National Joint Staff during the 1990/91 Gulf War; Director of Financial Services in the Finance Group; Director General Supply Systems; and later Associate Assistant Deputy Minister (Materiel)/Chief of Logistics Doctrine and Operations in the Materiel Group. He was appointed Logistics Branch Adviser for the Canadian Forces from 1991 to 94, and Colonel Commandant of the Branch in 2011to the time of his death.

In 1997 Bill, the consummate logistician, made history when he accepted a request to head the Canadian Army. As Chief of the Land Staff he led the army until 2000 through a difficult time, and laid the foundation for its later success in combat operations throughout the world. Typical of his strategic vision was his initiative to integrate a very senior Canadian officer into the US Army command structure, resulting in then MGEN Rick Hillier becoming the Deputy Commander of US Army’s Third Corps, with its three divisions and 47,000 soldiers. In his last position as head of the army, Bill was also a member of the Armed Forces Council and Defence Management Committee.

In recognition of his exceptional contribution to the military communities of both Canada and the United States, he was awarded the Canadian Order of Military Merit (Commander) and the US Legion of Merit (Commander).

Following his retirement from the Canadian Forces in 2000, he spent 10 years in the private sector; first with Honeywell International as Vice President Operations, Honeywell Canada Logistics Services; and then with Mincom, Australia’s largest software company. He left Mincom in December 2010 to devote more time to his volunteer interests.

He approached his volunteer activities with the same passion and commitment that identified his military career. He became President of the Friends of the Canadian War Museum; a member of the Board of Directors of the Perley and Rideau Veterans’ Health Centre; and held board positions with the University of Ottawa, the Royal Ottawa Hospital and the Royal’s Institute of Mental Health Research.

Bill was predeceased by his wife, Mary Louise Leach, who died in 2003. Mary was a highly respected artist for National Geographic magazine and was commissioned by the Canadian Forces to travel to Canada’s far north to document military family life.

He is survived by his children, Kimberly (John Affleck), Marc (Celine Perrier) and Shelley; his grandchildren, Jamie and Jenna and his sister, Karen.