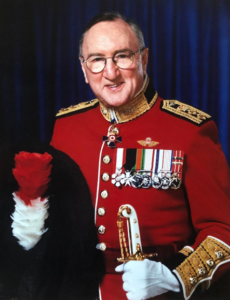 At Sunnybrook Health Sciences Centre on Sunday, February 24, 2019, Reg passed away peacefully in the presence of Sheila, his devoted wife of 59 years.  Born in London England in 1930, he was evacuated during the Blitz to the west country to further his education and which inspired him to choose accounting as his profession.

Major-General Lewis’ military career began when he joined his school’s Cadet Corps.  He joined the British Army in 1948 and served in the Royal Ordinance Corps in the UK, Egypt, Turkey, Greece and Eritrea.  In 1954 he came to Canada and joined the Militia; subsequently commanded The Toronto Service Battalion, Toronto Militia District, Central Militia Area; later becoming the Chief of Reserves for Canada and Special Advisor to The Minister of Defence (The Honourable Art Eggleton).  Following this, he was appointed President of the Inter-Allied Confederation of Reserve Officers of NATO (CIOR), an organization based in Brussels representing the Reserve Officers of the Alliance.  During this period, he received The Commander’s Cross of The Polish Order of Merit.  Later, he was appointed Honorary Colonel of the Royal Regiment of Canada.

In civilian life, he has been the President of the Parking Authority of Toronto, Chairman and CEO of The Toronto Economic Development Corporation and Chairman of Defense Construction of Canada Ltd.  He was appointed a director of Parc Downsview Inc. and has served as a Canadian Citizenship Court Judge.

In 2008 Reg received the prestigious, one-time CGA Canada Centenary Award as one of 100 exemplary Certified General Accountants who made an outstanding contribution to the accounting profession, his community and the lives of others.

A memorial service will be held at the Royal Canadian Military Institute, 426 University Avenue, Toronto, on Saturday, March 9th.  Friends are welcome to gather at 12:30 p.m. with the service to follow at 1:00 p.m.

In lieu of flowers, donations may be may made to the Veteran’s Comfort Fund, 2075 Bayview Avenue, Room KGW-01, Toronto, Ontario, M4N 3M5 or to a charity of your choice.  Condolences may be forwarded through www.humphreymiles.com