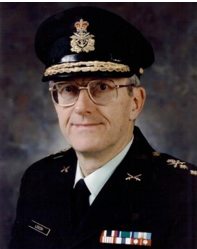 At his death, Dick was the senior surviving member of the Corps, a well-respected officer and gentleman known by virtually all the Corps.  In Ottawa, despite his illnesses in recent years he was a regular attendee and strong supporter of the RCASC luncheons.  He will certainly be missed.

Dick was an active and competitive athlete all his life.

Celebration of life to be held at a time and place to be advised.  Donations in memory of Richard may be made to the University of Ottawa Heart Institute or a charity of your choice.