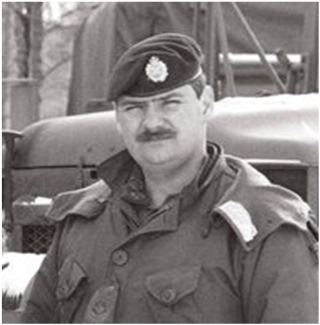 On September 8, 2022, at the age of 61, Raymond passed away peacefully, at home, with family at his side.  Predeceased by his mother, Mary Patenaude, sister Edna, and brothers Donald and Joseph.  He is survived by his sisters Ellen (Danny), Anne, Margaret (Dougall), Rosemary, Theresa (Marcel), Eileen, Kathleen, brother Mark, and many nieces and nephews.

Raymond’s biggest joy in life was his family, military service (1977-1994 – He was a former member of 28 Svc Bn’s Tn Coy), friends, and his Scottish Heritage, he loved wearing kilts.  He was especially proud of his “Lachance (Canada)” Tartan that he himself designed and registered in the Official Scottish Register of Tartans on June 29, 2012.  It was designed to commemorate the award of the Queens Diamond Jubilee Medal in 2012.

Raymond had a gift for storytelling, nobody told stories like him, his wittiness was unmatched and his selfless nature was admirable.  He will be eternally missed by everyone who knew him.

Donations in Raymond’s memory may be made to the Royal Canadian Legion, Orleans Branch 632.

To honour Raymond’s memory, a celebration of life will be held on Saturday, October 8, 2022 at 2pm at the Royal Canadian Legion, Orleans Branch, 800 Taylor Creek Drive. Serving members who wish to attend are encouraged to wear their uniform and medals.  Vets are encouraged to wear their medals as well.  Ray’s family has confirmed its open to anyone and are keen on seeing some military folks there.