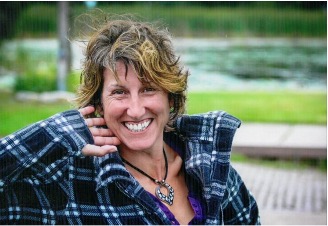 Yvonne Marie Keneford, age 56, passed away peacefully August 19, 2021.  She was a real fighter but eventually succumbed to cancer.  She was born May 5, 1965, in Halifax, Nova Scotia.

She served with pride for 28 years in the Army Reserve, Royal Canadian Air Force and Royal Canadian Navy.  It was important to Yvonne to have continued the tradition of military service from her father and grandfather and she was thrilled to see her son David following in her footsteps, also serving in the Royal Canadian Navy. The highlights of her military service were the years spent in Germany supporting NATO, service in Sarajevo and numerous deployments sailing on Navy ships.  It meant so much to her and her father when she achieved the Navy rank of Petty Officer First Class.

Yvonne was extremely proud of her children Danielle and David, grandson Charlie and son in-law Gregory. They were truly the lights of her life. She had a lot of fun riding her tractor with Charlie and loved touring Europe with her children, family and friends. She grew up in Lower Sackville.  Despite describing herself as a tomboy, she competed in beauty pageants and in gymnastics. Childhood summers were spent with large family gatherings at her grandparent’s house on her beloved Porters Lake, as well as camping in Shubenacadie.

She loved cycling and water sports. With Mark, she cycled around the Cabot Trail twice, and kayaked the Rideau Canal system from Kingston to Ottawa. An adventurous spirit, who loved life, she bought motorcycles and learned to ride. She also had an artistic side, taking up photography and art, as well as learning to play guitar.

Yvonne was full of life and loved by all her family and friends. She always brought smiles and happiness to everyone around her and developed long and endearing friendships.

Donations can be made to the Canadian Cancer Society in memory of Yvonne Keneford in lieu of flowers.

If you would like to watch a recording of the service, please visit the following page: https://funeraweb.tv/en/diffusions/35558