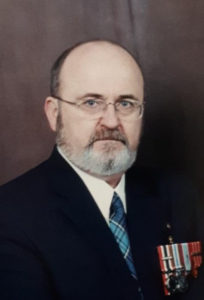 With heavy hearts the family of Charles “Chuck” Barry Kaizer announces his passing that occurred on Sunday May 12, 2019 at Bobby’s Hospice.  Born in1953 in Antigonish, NS, he is survived by his loving wife of 45 years, Linda (Bordage) Kaizer; son Adam (Renée); and granddaughter and the apple of his eye, Emily Marie;

Chuck was a member of the Canadian Armed Forces for 25 years serving in CFB Gagetown, West Germany, RSS Thunder Bay and CFB Shearwater.  Following his service, he was employed as a Bus Driver for 17 years with SMT then in Fort Mc Murray, AB.

Resting at Fundy Funeral Home, 230 Westmorland Road on Thursday May 16, 2019 from 2-4 and 6-8 p.m.  A Mass of Christian Burial will be celebrated from Stella Maris Catholic Church on Friday May 17, 2019 at 12 Noon.  Private family interment will be held in St. Joseph’s Cemetery at a later date.

For those who wish, donations in his memory may be made to the Canadian Cancer Society or the Kidney Foundation of Canada.

More sad news for the trade that I have received from Donnie Cappler.  Chuck Kaizer, Ken Shepard’s best friend for over 37 years has passed on.  Chuck we shall miss you terribly. Rest well my friend.