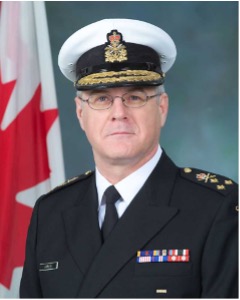 It is with great sadness that the family of Gregory Jarvis announce his passing in Ottawa on November 13th, 2022, at the age of 69. Beloved husband of Rita Jarvis (Hovey). Cherished father of Kari Jarvis (Steve) and the late Corey Jarvis. Loving grandfather of Anna and Max. Brother of Lindon (Judy) and Perry (Dianne). Son of the late David and Helen Jarvis.
Greg was born in Saint John, New Brunswick in 1953.
He enrolled in the Canadian Forces in 1971 and completed his studies at the University of New Brunswick and the University of Alberta. Initially posted to the Base Controller Branch at CFB Edmonton where her served as Non-Public Funds Accounting Officer and later Accounting Officer. In 1978 he was posted to National Defence Headquarters, where he served as Staff Officer to the Director General Financial Administration until proceeding to sea in 1980 where he served in HMCS Athabaskan as Deputy Supply Officer, HMCS Nipigon as Supply Officer in 1981 and HMCS Athabaskan as Supply Officer in 1982.
In 1983, he was posted ashore to Maritime Command Headquarters where he served as Staff Officer Accounting Services and later Senior Staff Officer Finance. He attended the Canadian Forces Command and Staff College in 1985 and was promoted to Commander upon his graduation in 1986. In 1989 he was posted to CFB Halifax as Base Supply Officer.
Promoted to Captain (N) in 1990 he assumed the duties of Deputy Chief of Staff (Logistics) and in 1992, assumed the appointment of Command Comptroller for Maritime Command. In 1993 he was posted to National Defence College in Kingston to attend course 47 and was promoted to the rank of Commodore and assigned duties as Director General Financial Services at National Defence Headquarters. In 1996 he was promoted to Rear-Admiral and was appointed to the new Director General Finance position and named the Departmental Comptroller. He was promoted to Vice-Admiral in December 2000.
Greg proceeded in his professional development, among other things, completion of the Queen’s Executive Program and a one -year assignment with the Conference Board of Canada exploring best practices in human resource management. He returned to National Defence in 2003 and served as Special Advisor to the CDS pending his appointment as Assistant Deputy Minister (Human resources – Military).
Greg holds a Master of Business Administration Degree from the University of Alberta and is a Certified Management Accountant.
Following his retirement in 2006 Greg worked as an Auditor with the Federal Government.
Aside from Greg’s impressive Military career, he was cherished by his family and fondly remembered for his self-taught ways of fixing anything and everything. There was nothing he couldn’t do, especially when it was a request from his grandchildren.
Family and friends are invited to Beechwood, Funeral, Cemetery and Cremation Services (280 Beechwood Avenue, Ottawa), for a Memorial Service on Thursday, November 24th, 2022, at 10 a.m., followed by an interment with Military Honours in the National Military Cemetery located at Beechwood Cemetery. At the request of the family, we please ask that you wear a mask when attending the indoor services. For those who wish to make a donation, please do so to Diabetes Canada.