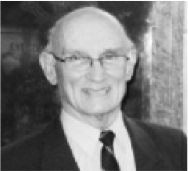 A Freeman of the City of London and former Commanding Officer of the 28 (Ottawa) Service Battalion, Mike passed peacefully surrounded by family on April 5, 2016. Born to Donald and Estelle (Peggy) Hind, August 6, 1937, he married Evelyn Dawn Ward February 27, 1960, and together they immigrated to Canada in 1961. Michael (Pops) was the loving father of four children, Donald, LCOL (also a former Commanding Officer of 28 (Ottawa) Service Battalion) (Krista Rhyno), Linda (Glenn Ayerst), Michael (Anuradha Dugal), and Penny. He was a Grandfather to nine grandchildren; Keith Hind, Rachael Hind, Lauryn Ayerst, Ryan Ayerst, Kumar Hind, Devdas Hind, Jai Hind, Derek Hind and Karley Hind. He was also a great-grandfather to Evelyn May Hind.

Michael was educated at the City of London School for Boys and following graduation he completed his National Service with the 34 Light Anti- Aircraft Regiment, Royal Artillery. He enrolled in the Royal Canadian Army Service Corps in 1965 and was commissioned in 1966. Michael qualified as parachutist at the age of 43 and was one of the few Canadian Army Officers ever to sail into the Pool of London under a raised Tower Bridge in a submarine commanded by his brother Commander Paul Hind, Royal Navy, the Captain of HMS Olympus.

Michael was a Fellow Chartered Insurance Professional and worked in the insurance industry for over 50 years holding a variety of positions on the company and broker side of business. Michael retired in September 2007 as the Principal Broker of the Pegasus Insurance Network.

In lieu of flowers, the family would appreciate donations to a charity of your choice or the Canadian Cancer Society .

Mike was a strong supporter of the Royal Canadian Logistics Service Association and was a former Vice-President of the RCLSA NCR Chapter.

Family and friends are invited to pay their respects at the Daley Family Funeral Home, 6971 Bank St. (between Scrivens Dr. and Metcalfe corner) on Monday, 11 April from 1-1:45 p.m. A Service in memory of Michael will follow in the Chapel at 2 p.m.