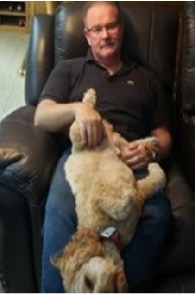 Rob, beloved and revered husband to Deborah, father to Ryan and Arijana (Tara) and his four-legged best friend, Declan passed away 19 December 2021, age 55.  Born in Halifax Rob was an uncle, great uncle, cousin, and friend to so many; if he was your friend, you knew it every day. He often laughed at his new role of Grandpappy to grand dogs, Rupert and Arthur.

Rob enjoyed an illustrious career in the Royal Canadian Air Force as a Storesman/Sup Tech though he sometimes referred to it as a sports scholarship.  He had a second career as a Site Manager with the UN in Africa.

With the ability to retire early, Rob and Deb purchased a home in Florida for the winters and golfed, went to MLB spring training games, saw so many NHL games, and cruised around in his prized rag top Beamer just taking in the sheer magnificence of their lives.   In the summers at home, Rob rode the trails on his side by side, walked his 8-acre property with Declan in tow listening to The Hip, and fished whenever he could.  He so loved fishing and the sheer tranquility of the water; nothing made him happier than the boys’ annual fishing trip in the bush with Georgie, Johnny, David, Andy (predeceased), Trevor, Alain, Norm, Eric and the kiddos Nicholas, Tanner and Tater-tot.  Many other summer days were spent on household projects with his best bud Harry and all they did was joke and laugh; nothing ever really got accomplished on that first day.

In keeping with Rob’s wishes, cremation has taken place.  A celebration of his life for family and close friends will be at a later date.  In lieu of flowers, donations in Rob’s name can be made to KidSport Canada or the You Can Play Project.