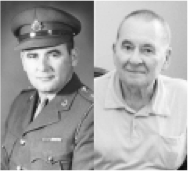 Robert Grenier passed away on June 16, 2016. He was born in St. Romuald, Québec on March 28, 1933. Predeceased by his loving and devoted wife of 54 years, Lauretta in 2010 he is survived by his four children and their spouses, all of whom will miss him very much: Paul (Charlene), Marc (Diane), Linda (Fred) and Carolyn (Barry). He leaves behind his beloved grandchildren Sean, Nicole, Danielle, Alex and Austin, and step- grandsons William and Glenn.

He served in the Canadian Armed Forces Service Corps for 38 years, where his travels brought him throughout Canada and around the world, including UN Peacekeeping duty in the Congo in the early 1960’s.

After a private family service, Robert will be laid to rest at the Pinecrest Cemetery, reunited with Lauretta once again. In lieu of flowers, donations may be made to the charity of your choice. Robert was a devout Catholic and Knight of Columbus and always reminded us to “remember the poor”. Online condolences may be made at www.colefuneralservices.com