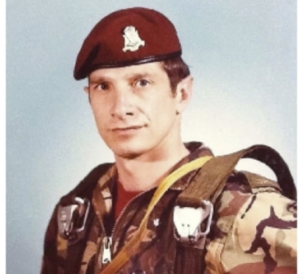 We are sad to announce the passing of Phil after a 10 month battle with brain cancer.  He is survived by his wife Gail (nee Brown) of Edmonton and daughter Krista Meyerink (Wes) of Sturgeon County.

Phil spent 30 years in the Canadian Armed Forces including two postings to Germany, tours to Croatia and Bosnia, as well as many postings in Canada. Phil was an airborne trucker who served as RSM 1 Svc Bn Calgary and Edmonton.  He retired after 30 years of service as a Chief Warrant Officer and settled down in Edmonton.

In lieu of flowers donations can be made to Valour Place Society Edmonton or a charity of your choice. Sign the online guestbook at www.evergreenmemorial.com

We may have been in Petawawa together in the early 80s.  He was a WO (B Pl) with Lt Jeff Forgrave‎ in Supply + Transport Coy, 4 Svc Bn in 87-88 when I had Supply Platoon.  He then went to Aerial Delivery Coy of Cdn Airborne Centre, Edmonton from 89 to 91.  I think he stayed in Edmonton on promotion to CWO as MSE Controller after CABC, but pretty sure he had another MWO position in between…possibly a G4 TN job at LFWA.  We last served together in 1 Svc Bn, when he was RSM‎.  I may already have been at HQ 1 CMBG.