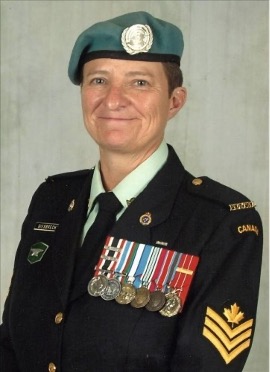 Judi was born in to a military family and grew up in Rivers, Manitoba.  In 1973, she enlisted in the Canadian Armed Forces joining the first group of 10 young women since WWII to train as metal technicians.

Judi left the military briefly in 1977 and worked as a private investigator, but then reenlisted in 1981 to become a Postal Clerk in the Logistics Branch.  Following a UN peacekeeping tour during the war in Bosnia-Herzegovina, Judi was awarded the Deputy Chief of Defence Staff Commendation for “her professionalism and dedication to duty” while encountering gunfire through dangerous territory.

After 27 years of service, Sergeant Judi Giesbrecht retired from the Canadian Armed Forces to her home in Kitchener, Ontario.

Judi’s love of travel was fueled by postings across Canada, in Germany, England, and on five UN Peacekeeping Tours Including the Middle East and Sarajevo.  Over her life she travelled to fifty-six countries on six continents, including Antarctica…a bright light wherever she went.

Judi will be remembered by her mom, Maryanne Giesbrecht, sister, Katherine Nunweiler, and brother Jerry Giesbrecht. Judi was predeceased by her brother, Robert Giesbrecht, and father, Henry Giesbrecht.  When friends think of Judi, they will smile recalling her humour and passion for life.

A celebration of life will be organized at a later date.  Judi’s wish was that her friends, Tish and Charlotte (Chuck), scatter her ashes in the Canadian Rockies.

As expressions of sympathy, donations to the Kitchener Waterloo Humane Society to honour her love of animals would be appreciated by the family (cards available at the funeral home).