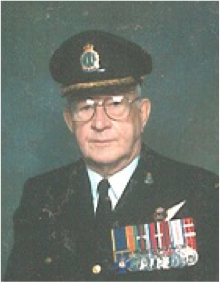 Bob passed away peacefully and courageously at the Kingston General Hospital, on Sunday, November 8, 2015 after a brief illness, in his 90th year. He is survived by his beloved wife Norah, of 40 years, and his children, Susan, Stephen (Carrie), Christine (Al), Anne McMahon (Bryan) and Michael. He is also survived by nine grandchildren and four great-grandchildren.

Bob was a WWII veteran who retired on 30 December 1980 after completing a 37 year distinguished career in the Canadian Forces. He started his career in the RCAF as an Air Gunner, then as an Aircraftsman Clerk Stenographer. His service included a tour with NORAD as a Staff Officer followed by a posting as the Base Administration Officer at CFB Comox. His last posting was as Commandant of the Canadian Forces School of Administration and Logistics at CFB Bordcn. Bob retired in the Kingston area where he remained active as a long-time supporter of veterans and the military.