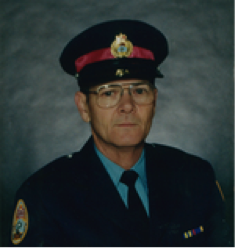 Rick, of Brandon, MB, formerly of New Westminster, BC, passed away at the Brandon Regional Health Centre on Friday, April 22, 2016 at the age of 74. Rick was born at Vancouver, BC on May 11, 1941. Growing up in the Greater Vancouver Area, Rick spent many youthful days fishing, cycling, delivering newspapers, as well as meat deliveries for his step father’s meat shop.

He enlisted in the Canadian Armed Forces in 1956 and was eventually stationed in Shilo, MB. Rick married in 1963 to Barbara Joan Drost. From 1965-68 he spent time stationed in Germany.

Rick left the Canadian Military and joined the Brandon City Police Service in 1969. He spent the remainder of his working time with the BPS where he retired in 2000.

During his retirement he kept busy with golfing, bowling and spending time with family. Rick was a member of the Brandon Police Association, Royal Canadian Legion, Senior men’s league Deer Ridge Golf Course, and RCOC. Some of Rick’s accomplishments that he was proud of were getting a hole in one at Shilo Golf & Country Club #13, 31 years of Exemplary Police Service (he received two commendations from the Chief of Police (BPS), acting as Torch bearer for the ’88 Winter Olympics, his pet beagles and cat and most of all his family.

Rick will be lovingly remembered by his wife, Barbara and his children, Charmain and Rick.

Donations in memory of Rick may be made to the Brandon Humane Society, 2200-17th Street East, Brandon, Manitoba, R7A 7M6.