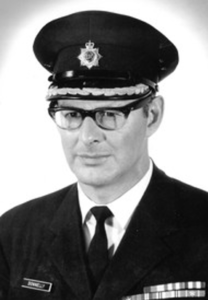 It is with great sadness that we announce the passing of Douglas Donnelly on April 1st at the age 96 at the Sunnybrook Veterans Centre.  Doug will be dearly missed by his loving wife and best friend of 73 years Jean (nee Stone).

Doug was born and raised in Kingston Ontario.  Upon graduating from high school, Doug found employment in Kingston and Vancouver, building ships in support of the war effort.  In 1943 Doug enlisted in the Royal Canadian Infantry Corps.  He was shipped overseas as part of the 49th Loyal Edmonton Regiment, first to England and then to Italy.  He was wounded while fighting in the Battle of Casino.  Upon his release from hospital Doug was transferred to the Royal Canadian Artillery, joining older brother Ed.  Once Italy was liberated, Doug was transferred to northwest Europe where he fought in the liberation of the Netherlands until the end of the war.

Upon returning to Canada, Doug decided on a military career, and transferred to the Royal Canadian Army Service Corps as a private.  It was not surprising that promotions came quickly and in 1952 Doug received his officer’s commission with the rank of second Lieutenant.  During his career he had postings in Kingston, Toronto, and Ottawa, Ontario, Fort Churchill, Manitoba and Soest, Germany.  Doug also served in 1958 as a member of the United Nations Emergency Force, a U.N. peacekeeping force and was stationed in Italy and the Sinai desert.

After retiring in 1972, at the mandatory army retirement age of 49, Doug moved to Toronto and joined the Motor Fuels and Tobacco Tax branch of the Ontario Government’s Ministry of Revenue as an auditor.  He retired in 1988 as a Senior Tax Specialist.

When not auditing, Doug played a lot of golf, and decided that the life of an advertising model and actor would help fill in his spare time.  He did bit parts as an extra in several movies, but made his mark in print advertising.  His smiling face was seen in ads for Toshiba, Investor’s Syndicate, Via Rail, Eveready batteries, the cover of a Sears catalogue, and a Fleischmann’s margarine ad with Bobby Orr.

Doug’s retirement from the working world starting him on his next career, and that was being a student at the University of Toronto.  Doug enrolled in the bachelor’s program with a major in European history.  With no great urgency, Doug paced himself and took one course a year for the next 15 years.  He graduated in 2003 at the age of 80 with a B.A. degree.  His most vivid memories as a student were sitting through lectures by a young professor, expounding the life of the average soldier during World War II, and knowing how totally wrong the professor was.  As Doug approached his graduation year, he would chuckle at his sessions with a U. of T. guidance counsellor, wanting to know what his career plans and ambitions were when he graduated.

With many careers behind him, Doug enjoyed a quieter life, doing some travelling, enjoying dinners with family and friends hosted by Jean and himself, and following the Blue Jays.  Every Remembrance Day, Doug would go to the Old City Hall Cenotaph to pay tribute to his fallen comrades.  It was a frequent occurrence that Doug’s picture would show up in newspapers or on local TV news reports, providing quotes on the importance of continuing to honour and remember our veterans.  In 2015, Global TV wrote an article titled “Veteran mobbed by autograph-seeking kids”, showing Doug being surrounded by young school aged children, clamouring for his autograph and asking questions about his service.  In the family history titled “The Donnelly’s” written years ago by older sister Josephine “…you would never have believed that such an angelic-looking, knobby-kneed, little hellion would turn out to be such a suave and debonair, successful man”.

As expressions of sympathy, donations in Doug’s memory may be made to the Heart and Stroke Foundation.  Once the current environment in which we are living in subsides, a ‘Celebration of Life’ will be held at a future date in Toronto.  Details of the ceremony will be posted when available.