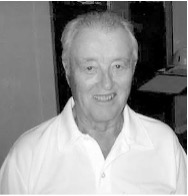 It is with sadness we announce the passing of our husband, father, grandfather and friend on April 4, 2022, at age 95. George was born on a farm near the town of Duval, SK on June 23, 1927, the only son of John and Beatrice Dickie.  He is predeceased his first wife, Honora Ingram, mother of his children.  He is survived by his children, Mike, Dave, Anne, Shelley, Tom, and Kristine, 10 grandchildren, and 14 great-grandchildren.  Also left to mourn, his wife of 41 years, Lorraine and her children, Norm (Karin) in ON, Darryl (Tracy) in AB and Sandra (Greg) in Victoria, 8 grandchildren and 7 great-grandchildren and nieces Sherry, Copper and Cindy.

George was a career Navy man.  In June of 1945 he hitched a ride to Regina and joined the Navy but he was not called to serve until November of that year.  He started his career as a Naval Storesman and later took his commission and served as a Naval Supply Officer.  During his 32 years in the Navy, he served on several ships as well as land appointments in Grimsby, Cornwallis, Churchill, and Victoria (Naval Supply Depot, Esquimalt).

He retired to live in Victoria in 1977 where he met and married Lorraine.  He enjoyed his 45 years of retirement doing the things he loved to do – golfing, curling, playing bridge and shuffleboard at the Legion, taking six cruises and many road trips in their small motorhome.  In 1992 George was lured to Duncan by the chance to own a single-family home and a membership in an 18-hole golf course.  Duncan offered all the things George liked to do even the small vegetable garden he planted and weeded each year; and most of all, making many good friends.

No service will be held due to the pandemic.