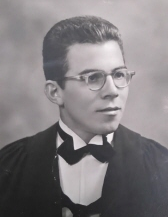 John, “a trucker for life” as quoted by his daughter, Helene, passed away 23 April 2017 in his 84th year.  Although John had Parkinson’s disease, he was doing well at the Trent Valley Nursing Home in Trenton.  He recently had a setback and the last few days were difficult for him.  He was surrounded by family and he went peacefully.  He was also able to enjoy a small cup of Coors Light and some ice cream, before he went.

John had a special place in his heart for the Royal Canadian Army Service Corps and the Logistics Service.  His ashes will be spread at Waggoner’s Park (Ontario War Memorial) at Canadian Forces Borden at a later date.

John was predeceased by his wife Marion.  He is survived by his children Helene, Anne, Jean-Marc, Suzanne and Michel; his grandchildren Shaun, Shannon, Dominique, Darrick, and Sarah and great grandchild Emerson.

As an expression of sympathy, donations to Parkinson Canada would be appreciated.  Online guest book and condolences can be found at www.weaverfuneralhomes.com