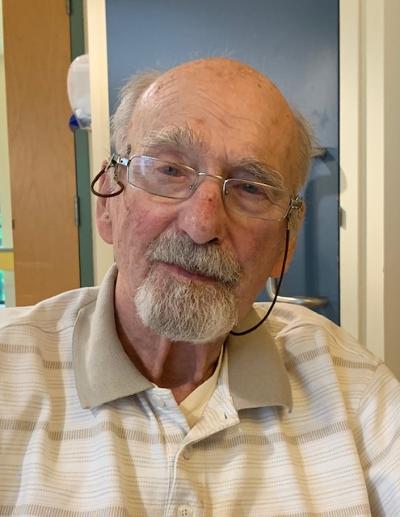 Bob passed away 6 September 2021 at age 94 in Victoria.  He is survived by Wendy, his wife of 69 years, sons Colin (Cdr (Ret’d), Halifax, and Robert, Mississauga and daughter Jann Everard, Toronto.

Born in Winnipeg, Bob became interested in joining the navy after his experiences in sea cadets.  He joined the University Naval Training Division, HMCS Chippawa, as an Ordinary Seaman Officer Candidate in 1945.  In 1948 he took an oral board at HMCS Stadacona, was promoted to A/Slt Supply Branch and transferred to the RCN.

As DCOS Log, Bob was amongst a group of DND and naval officers involved in the transfer of CFAV Sackville from Defense Research Establishment Atlantic to the volunteer Canadian Naval Memorial Trust (CNMT).  Bob was a life member of the CNMT/HMCS Sackville.

Bob retired in 1982 and returned to Winnipeg as the DND Regional Audit Director from which position he retired in 1987 and then moved to Victoria.

A naval historian and author, Bob co-authored with Fraser McKee, two books: “The Canadian Naval Chronicle” published in 1996 which relates the details of the RCN’s successes and losses in World War II and “Three Princes Armed” published in 2008 which covers the pre-war, wartime, and post-war stories of the three CNR liners that were converted to Armed Merchant Cruisers, then to Landing Ships Assault and an Anti-Aircraft cruiser, namely HMC Ships Prince Robert, Prince Henry and Prince David.

(Special thanks to Colin Darlington who provided information for this obituary, the CNMT Newsletter “Action Stations” obituary published in Vol 40-Issue 2, Fall 2021 and to Robert Williamson, Editor of “The Newsletter of the U.N.T.D Association of Canada” for his cover story published in the Fall Edition, September 2009, Volume 3, Number 32)

I met Bob in 1965 when I was at the University of Manitoba and Bob was the SSO Supply of Training Command on my dad’s staff.  It was 9 years later in 1974 that I heard from him when he was our career manager.  I was serving in Base Supply Esquimalt as an army officer on the DEVIL program.  He had only one question “Have you ever been to sea Billy!!”. Thus started my next thirty years in the navy.  He was my mentor and I greatly appreciated his leadership and guidance over many years.  To many of us he was the father of the “D6” Naval Logistics Officer Program.

From LCdr (Ret’d) Louise Fish, the first woman to serve as a Sea Log Officer:

In 1978, I had completed my BA and was posted to CFB Trenton as a Supply Administration Officer.  I was attending a logistics training course at CFSAL (Canadian Forces School of Administration and Logistics) at CFB Borden when Capt(N) Darlington, the senior naval logistician at the time, attended the school during a career manager visit.  He took me aside and asked me if I had ever thought about serving at sea.  I was taken aback; the idea had never crossed my mind.  I was army focussed, despite my current posting to an air base.  In fact, I really did not know much about the Canadian Navy and couldn’t tell a frigate from a Frigidaire.  Everything I knew about naval operations came from WWII movies like “Sink the Bismarck”.  However, this was a golden opportunity to serve, as a woman, in an operational capacity.  I did not know there were also trials afoot in the army, so I gave Capt(N) Darlington a resounding “Yes!”  This was what I joined for!  To serve operationally rather than working in a Base job that a civilian could perform just as well.