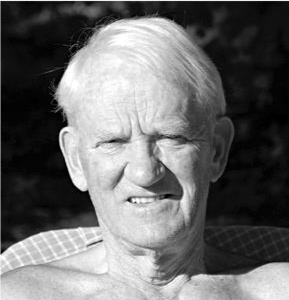 Mathew passed away quietly on June 15, 2018 surrounded by those who loved him and just 11 days before his 66th Wedding Anniversary. Born in St. John’s Newfoundland May 29, 1926, he is survived by his wife Betty, daughter Barb, son Chris and his wife Denise, grandson Brandon and his wife Lindsey, and great-grandchildren Mason, Taylor and Carter.
Mathew joined the Canadian Army in 1944 and transferred to the Canadian Air Force in 1947. He had many postings with the military including Resolute Bay, Baker Lake, Germany, St John’s, Summerside and Goose Bay. His final posting was Comox in 1967. He retired in 1971.
With all the postings and moves he was always proud that he managed to ensure that both of his children were born in Newfoundland.
The whole family, including the cat and dog, had a cross-country adventure as Mathew drove from St. John’s to his last posting in Comox in a Volkswagen Station wagon.
After retirement he worked for Gulf Oil in Courtenay and then Crown Zellerback in Campbell River before finally retiring in 1984.
He had a long and wonderful retirement. He loved the Comox Valley and he and Betty lived in Courtenay for 49 years. They spent many winters in Hawaii and Yuma, Arizona. Summers were spent at Tall Timbers on Sproat Lake. He continued waterskiing into his 70s. He loved his golf, his garden, crossword puzzles, and sudoku. He enjoyed many years of oil painting and was an avid reader. Often a book would be across his chest as he slept in his chair with the cat. He was a gentle, kind and generous man. His brother Leslie and sister Muriel described him as a young rascal. He remained mischievous to the end of his days. He loved to laugh and often did. Hopefully he is having a glass of red wine and bragging about his golf game with all the friends and family that have passed before him.
A Memorial Service will be held at First Memorial Chapel, 1720 Bowen Rd, Nanaimo on August 11 at 11 AM.