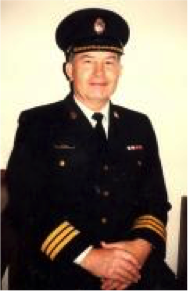 CHUPICK, Michael Lawrence of Victoria, BC passed away on January 26, 2015. Born in Hubbard, SK on May 29, 1929, he leaves his family who will cherish his memory: beloved and devoted wife Julie of almost 62 years and eight children. Mike’s 33-year career in the Royal Canadian Navy began as a UNTD cadet at Naval Reserve Division, HMCS Unicorn, SK in 1951. He went on to serve at Naden, Esquimalt and in Halifax aboard HMCS Antigonish and HMCS Restigouche, as well as postings in Saskatoon, Winnipeg, and Ottawa as DMAS 6 and CFB Lahr as the CANEX Officer. Mike retired in 1984 in Ottawa as a Commander. He is deeply loved and will be truly missed by family and friends.