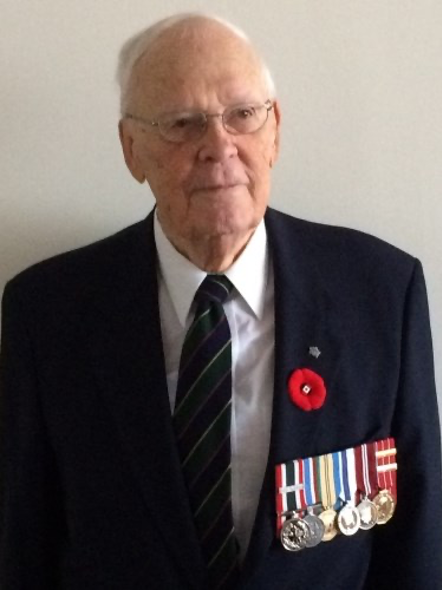 There is a little less laughter around the dinner table these days, because on Wednesday, May 20, 2020, Don Carrington passed away in his 92nd year after a brief illness that was not related to Covid-19. He was the beloved husband of Joyce for 65 years. Wonderful, loving father to Donna (Nick) of Otter Lake, QC, Susan of Deseronto, ON and David (Colleen) of Quispamsis, NB. Beloved Grampa to Sean, Peter, Michael, Kelly and Jamie and GG Don to Evander, Isla, McKinley, Carter and Cayson.

Don began his career in the military with the Royal Canadian Army Cadets, The Canadian Reserve Army and he was a proud member of the Argyll & Sutherland Highlanders in the Canadian Army Militia. He maintained a lifelong connection to the Argyll’s even after joining the Canadian Army Active Service Force in 1951. As he progressed to Lt. Colonel, Don had a career in the Royal Canadian Ordnance Corps, where he had postings to a variety of logistics positions. He enjoyed a posting to Soest, Germany immensely and many of his life-long friends were made during those years. Don spent time in the United Nations peace-keeping force in Ismailia, Egypt in 1977. Prior to his retirement from the military, Don was the commanding officer of the CF Publications Depot. Two days after retirement, he joined the Canadian War Museum, working as a Curator of Collection Management. He retired in 1991 but remained connected to the museum when he became President, and then Executive Director of the Military Museums of Canada. Don was still happily volunteering at the Canadian War Museum archives until a few months ago.

Don loved a good party, be it at the officer’s mess or the Hamilton YMCA, where he deejayed Friday night dances using his extensive collection of swing and boogie woogie music. He was also known to deejay bagpipe concerts at dawn for those who partied a little too long and a little too loudly at Johnson Lake.

In 1964, Don, his brother and some friends built a cottage at Johnson Lake near Ladysmith, Quebec. The cottage was to become the heart and soul of the Carrington family. All were welcome and Don fairly glowed when the cottage was bulging at the seams with family and friends having a good time. Many fine speeches were pronounced over the dinner table, as were terrible puns and seriously funny jokes. Wherever he was, laughter was sure to follow.

Donations to the charity of your choice are gratefully accepted, because Don loved and supported them all. Condolences/Tributes/Donations Hulse, Playfair & McGarry www.hpmcgarry.ca