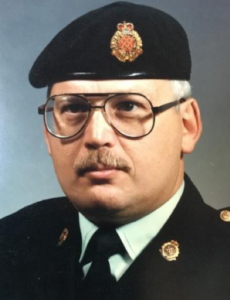 Wayne, age 74, passed away suddenly and peacefully on 9 August 2019.   He is greatly missed by his wife Johanna (Voorhaar) Carr, daughters Angelena (Dion) and Ashley (Evan) and son Derek (Trish).

Wayne proudly served in the Department of National Defence for 48 years – 35 of them within the Canadian Armed Forces.  Wayne worked alongside multi-national forces in Norway, Egypt, Syria, Israel, Chile, Scotland, Australia and Italy. While originally badged RCOC, he spent the majority of his career in Logistics-Supply.  Postings included Commanding Officer, 2 Service Battalion and Directorate of Supply Chain Operations at NDHQ.  He played a key role in bringing the Supply System Upgrade to fruition. Following retirement, he joined ADM(Mat).  He retired from the Public Service in 2013.  Lately he was working as a consultant for DGMSSC.

For 49 years, “The Dad”, was a devoted father and family man to his children and for 53 years a loving husband to Johanna. Wayne was excited to have achieved his best golf score ever a week prior to his death. No doubt his game improved by his invigorating weekly games with his 88-year-old uncle and golfing with his sons-in-law. Always ready to help, Wayne often travelled with a carload of tools to repair a family member’s sink or deck. His woodworking shop had a line-up of “honey-do’s” for all family members.

A passionate and skilled outdoorsman, Wayne cheerfully guided the family on treks in the summer or winter, often with bird-seed in his pocket for birds. His story-telling included hilarious adventures on the sailing yacht “Windswept”, where he was known as a “helm-hog”, “good sport” and “good guy to have around in case of trouble”.

Wayne is remembered by one of his colleagues as “an extraordinary man, a great leader, a fantastic mentor and some one who knew the technical side of our business like no other.”.

He was interred at the National Military Cemetery of the Canadian Armed Forces, Beechwood, Ottawa on the 27th of September 2019.

Donations to the Heart and Stroke Foundation of Canada or the Canadian Coast Guard Auxiliary – Maritimes would be appreciated by the family.