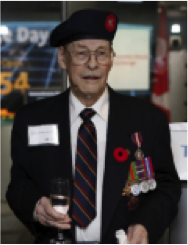 Les passed away peacefully 30 May 2016 at Groves Memorial Hospital, Fergus, at the age of 95. Predeceased by his loving wife Beatrice Mary (2001). Dear father of Ernest (Bonnie), Thomas (Karen), Jamie (Susan) and Gregory (RoxAnne). Sadly missed by grandchildren Justin and Jeremy; Kristoffer and Heidi; Jessica; Lisa and Jeff; and many great and great-great-grandchildren.

Les was a WWII Hong Kong Veteran (RCOC) captured by the Japanese and held as a prisoner of war for four years. After the war, Les completed university and started a successful career in financial management. Upon early retirement, Les purchased a farm in East Garafraxa and became Grand Valley’s first full-time clerk. Les was a gentleman and a family man.