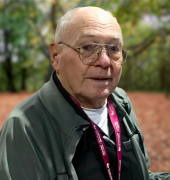 With great sadness, his family wishes to announce that Ted passed away peacefully at the Elizabeth Bruyere Centre in Ottawa, on Wednesday September 8, surrounded by family.  Ted passed at 87 after a battle with cancer.  He was predeceased by his beloved wife Katherine (Kay).  Loving father of Terry (Laurie) and Sharman (Rocke Robertson) and proud and devoted Grandfather of Tyler (Lexi), Callum, and Hailey and Great-Grandfather of Oliver.

Ted served his country for several decades with the Canadian Forces and then as a Public Servant with the Department of National Defence.  His overseas tours in Egypt and Germany gave him a thirst for travel which continued throughout his retirement.

An avid beekeeper, he kept family and friends at MacLaren’s Landing and Manzanillo in honey.  Lover of agricultural fairs and heavy horses, he had a love of farming and never forgot his western roots.

A Memorial service/ Celebration of Life will be announced in the New Year 2022.  In lieu of flowers, donations would be appreciated for the Elizabeth Bruyere Centre and the Rideau Valley Conservation Foundation – Memorial Tree Planting Program. Funeral Co-operative of Ottawa. www.fco-cfo.coop 613-288-2689

In the late 70s early 80s Maj Bruder retired from the Regular Forces, joined 28 Svc Bn, and was appointed OC Tn Coy.   I had the great pleasure in serving with him in Tn Coy.  He was truly a gentleman.  RIP Sir.