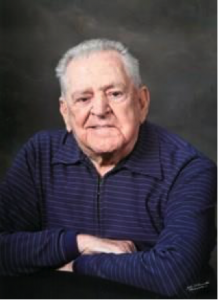 Paul passed away on Thursday, March 3rd, 2016 at the age of 96. He was predeceased by his loving wife, Euphemia “Bunty” Bedard of over 50 years and is survived by his daughter Barbara Dusablon (Andre), granddaughters Andrea (Mike Hann) and Karrina and his great grandchildren Kelsey and Nicholas.

Paul was born in North Bay, Ontario and longing to see the world he joined the Royal Canadian Navy during the Second World War, and was shipped to Europe. Paul met his wife to be, Bunty, in Scotland during those years. After being stationed in London, England they returned to Canada. He subsequently served in HMCS Stadacona, HMCS Bytown, HMCS Hochelaga and HMCS Donnacona.

In the early 1970’s, while living in Montreal, Paul retired from the Navy and joined the private sector working for a boat company then later a credit union. In 1987, Paul & Bunty officially retired and moved back to the sea, to Nova Scotia. They lived there until their passing.

Donations in Paul’s memory may be made to the CNIB or Paul would have appreciated doing a good deed for others. Condolences may be left for the family by going to: www.mattatallfuneralhome.com

I was saddened to learn of Paul’s passing. He and Bunty were great friends of my parents from their days together at HMCS Cornwallis in the early 50s. I had the pleasure of seeing Paul quite often during his volunteer work with the Naval Benevolent Fund. He was known as an unfailingly kind person who leaves behind a legacy of “service to others”. May his memory be a blessing for all.